Caskers Rewards members earn up to 4 store points back when buying this bottle.
Size750mL Proof92 (46% ABV)
This Jura single malt is a stand out expression, featuring a more heavily peated profile than its phenol-y-challenged siblings.
Notify me when this product is back in stock. 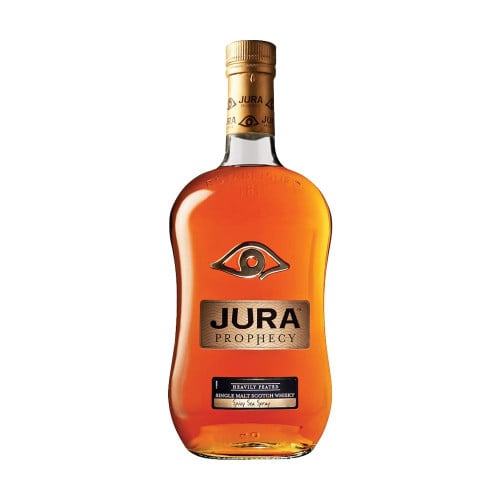 The Isle of Jura Distillery was founded in 1963. It is the only distillery on the Isle of Jura, which dates back to 1810 as being the first licensed distillery on Jura. The distillery sources its water from Loch a’Bhaile-Mhargaidh, and is owned by independent bottlers Whyte & Mackay. Situated sixty miles off the western coast of the Scottish mainland, the Isle of Jura is one of the most sparsely populated islands in Scotland — it boasts 5,000 red deer, 200 human beings, two churches and just one distillery.

Jura Single Malt Scotch Whisky is made from Scottish barley, which is milled at the distillery and mashed with hot water in order to release its natural sugars. Once the barley has been mashed, it is fermented and then distilled through Jura's 28-foot tall copper-pot stills. Jura malts are aged in bourbon casks, with some whiskies being finished in sherry. Their whiskies are really said to come of age around 16 years, this is when the whisky really starts to shine.

Jura whiskies tend to have less of a phenol character, despite the fact that the water flows through a great deal of peat, but all-in-all their range is quite diverse, having been known to round out their stable some peatier profiles. This Jura expression stands out amongst the lineup as a smokier, more heavily peated expression. Crafted in small batches from casks both old and rare, this whisky features deeply smoky notes and some coastal brine, richly evocative of its provenance. Silver medalist at the 2016 Hong Kong International Wine & Spirit Competition, International Wine & Spirit Competition, and World Whiskies Awards.

Aromas of peat on the nose, followed by nutmeg, cinnamon sticks, dry spices. The palate is heavy on the peat smoke, with baking spices and notes of coastal brine. The finish is long, and dry with notes of sea salt and a dash of nutmeg.