Size750mL Proof80 (40% ABV)
This lavish John Walker & Sons XR 21 is an exclusive blend of Johnnie Walker reserve rare whiskies, inspired by Sir Alexander’s own hand-written notes.
Notify me when this product is back in stock. 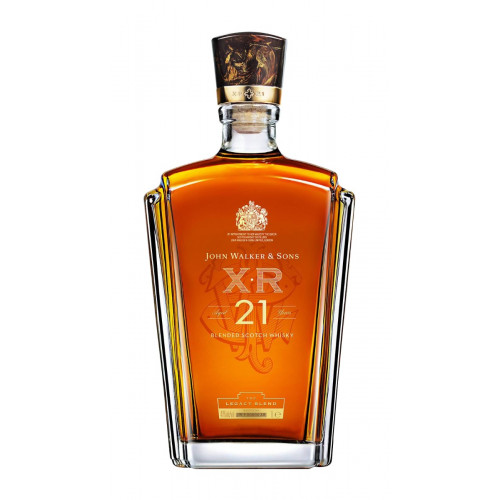 Upon his father's death in 1820, a young grocer named Johnnie Walker invested his £417 inheritance into a grocery and spirits shop on High Street in Scotland. While Walker himself was a teetotaller, he sold a popular single malt whisky under the name Walker's Kilmarnock Whisky (at the time, it was common for each store to have its own unique spirits). Walker's store was moderately successful, but by the time he retired in the 1850s, whisky sales represented just 8% of his business.

In 1857, Alexander Walker — John Walker's eldest son — inherited the store and began improving its selection of single malt Scotch whiskies. Alexander had previously apprenticed with a tea merchant in Glasgow and there, had learned the art of blending tea. Under his stewardship, the House of Walker began blending whisky and bottling it in an iconic, square bottle adorned with a slanted label.

Alexander Walker II was a master blender like his father and his grandfather before him, who devoted his life to making exceptional whiskies. In 1920, he received a knighthood from King George V for his services to the nation.

This John Walker & Sons XR 21 is inspired by this very special occasion. Inspired by Sir Alexander’s own hand-written notes, it is blended from the exclusive Johnnie Walker reserve of rare whiskies, all of which have been matured for a full 21 years. You can expect intriguing layers of intensity that are both surprising and delightful.

Assured, balanced and elegant, it has intriguing layers of intensity that are both surprising and delightful. Sweet honey and tempered spices come cloaked in warming smoke. Citrus zest, ripened tropical fruits and caramel swirl within hints of tobacco and raisins. The long, smooth, soothing finish is complex and fascinating - a myriad of influences played out over a subtle tapestry of peatiness.