Size750mL Proof102 (51% ABV)
Formerly a distillery-exclusive, this vintage whisky was distilled in 1996. The 19-year-old single malt was matured in ex-bourbon casks before being finished in Oloroso sherry butts for around 2 years. 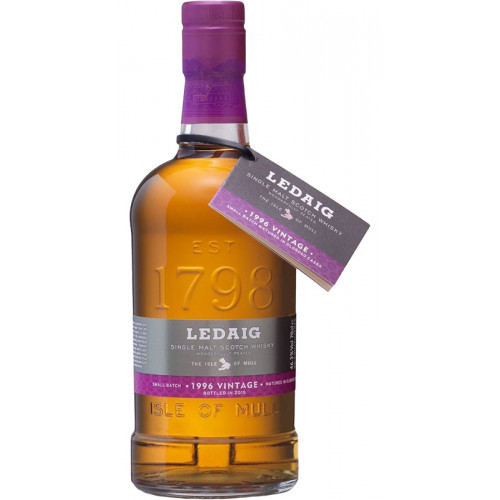 Ledaig whisky is made exclusively from Scottish barley that is dried directly over a peat flame. Once the grains have been dried, they are milled and mashed with water drawn from Mary's Well before being fermented for nearly four days in washbacks made of Oregon Pine. Following fermentation, the wash is distilled twice, first through one of Tobermory's copper-pot wash stills, and again through one of Tobermory's copper-pot spirit stills.

This expression was a distillery exclusive ― a treat for the visitors. Matured in ex-bourbon casks and finished in Oloroso sherry butts for around 2 years, this 19-year-old whisky was distilled in 1996. Bottled at 102 proof, it's a sweet, smoky, and spicy single malt with notes of peat, wood, brine, and sherry fruit.

Get your bottle of this sherry-finished 19-year-old whisky today!

The nose of this golden-yellow whisky opens with gentle peat aromas. The palate is gently sweet with fruity sherry notes and brine. The finish is smooth with a balance of peat, wood, and spice.