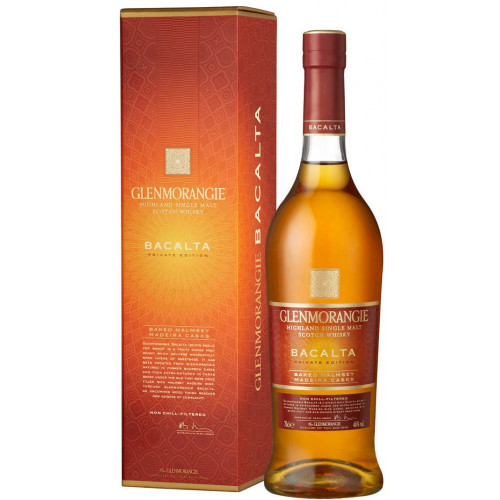 This single malt is the eighth release in Glenmorangie’s "multi-award-winning and always intriguing" Private Edition. Bacalta (Scots Gaelic for "baked") is inspired by the essence of the island of Madeira, a balmy Portuguese archipelago in the north Atlantic Ocean, southwest of Portugal.

"This sun-soaked single malt delivers wonderfully warm layers of sweetness, brimming with baked fruits and honeyed tones." The spirit is crafted from Glenmorangie single malt which is initially matured in ex-bourbon casks. The whiskey is then secondary maturated in bespoke, sunbaked, former Malmsey Madeira casks. Madeira is famously one of the sweetest and most prized of the Madeira wines. Bottled at 46% ABV.

Fragrant, honeyed and sweet on the nose, with ripe apricots, mead-like, and a curious flinty note, followed by sweet white chocolate. On the palate is an initial burst of mint toffee, with baked fruits such as caramelized oranges, honeycomb, almonds and dates. The finish is rich, with a syrupy aftertaste, followed by more caramelized citrus and pears, creamy fudge, and an intriguing mentholic sensation in the background.