Size750mL Proof92 (46% ABV)
Inchmurrin 18 Year Old is a fruity and sweet single malt crafted by the Loch Lomond distillery in Scotland. Only the finest American oak casks were selected to mature the whisky, creating an expression with a strong oak character.
Notify me when this product is back in stock. 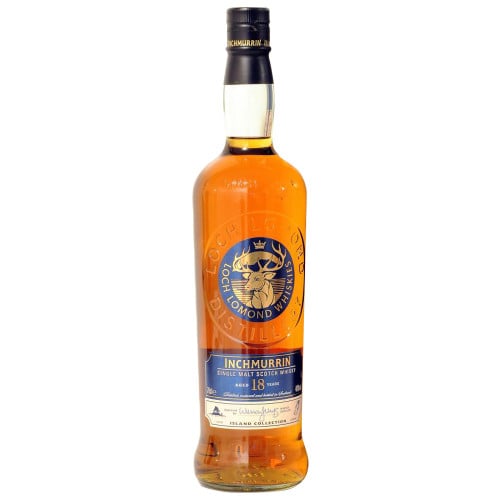 Located on the boundary between the Lowlands and the Highlands of Scotland, the area around Loch Lomond has been at the heart of the country’s whisky industry for centuries. The Loch Lomond distillery in Alexandria was commissioned by the Littlemill Distilling Company in 1965 with first distillation in 1966. In 1984, the distillery closed. Luckily, malt production was resumed only three years later, after the business was acquired by Alexander Bulloch and the Glen Catrine company.

Grain whisky production at the distillery began in 1993, making Loch Lomond the only distillery in Scotland producing both grain and malt whisky. The following year, the Loch Lomond Cooperage opened, and today Loch Lomond is one of only 4 distilleries in Scotland that has their cooperage on site. This gives the distillery total control over barrel repairs and charring, so every cask is perfect for maturing the Loch Lomond spirit. Every year, 7 full time experienced coopers replace metal hoops on around 10,000 barrels to tighten them, so the angel’s share doesn’t become any larger. Loch Lomond is probably Scotland's most versatile distillery, producing a full range of malts, from heavily peated whisky typical of Islay, to complex fruity expressions typical Speyside and full-bodied fruity expressions typical of Highland, as well as soft and fruity malt typical of Lowland.

Inchmurrin 18 Year Old is a fruity and sweet single malt Scotch whisky with a strong oak character. Loch Lomond’s Master Cooper at the time, Tommy Wallace, carefully selected the finest American oak casks to mature the liquid for a minimum of 18 years allowing time and nature to bring out the sweet character of the wood. This expression is non-chill filtered and bottled at 46% ABV. Inchmurrin whisky is named after the largest fresh water island in the British Isles, which lies in Loch Lomond.

The nose is rich, with deep aromas of heather honey perfectly balanced with crafted oak wood notes. The full-bodied palate has a strong oak character in harmony with tropical fruit of pineapple, mango and kiwi. Zesty citrus notes emerge in the background. The finish is long and warming, with elegant oak and stem ginger notes.