This product is available in: CT, DC, MN, NY, WA Unfortunately, we can't ship to PO Boxes and APO addresses.

Size750mL Proof93 proof (46.5% ABV)
This artisanal Irish whiskey is triple-distilled at the Dingle distillery before being aged in a combination of bourbon, sherry, and Port casks. Flavorful, balanced, and approachable, the 93-proof expression is exceptionally smooth.

This product is available in: CT, DC, MN, NY, WA Unfortunately, we can't ship to PO Boxes and APO addresses. 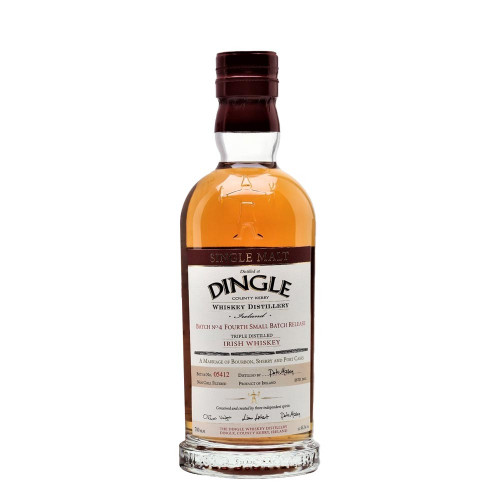 Two hundred years ago, there were over a hundred officially recognized distilleries in Ireland. Today there are less than ten. Founded as Ireland’s first artisan distillery by Oliver Hughes, Liam LaHart, and Peter Mosley in 2012, Dingle Distillery takes its name from the town in which it is located, where tourists flock to visit Europe’s westernmost human settlement. An old sawmill was converted into a distillery, where Dingle marries Ireland’s tradition of independent distilling with innovative processes only feasible for small batch producers.

Batch 4 of the Dingle Single Malt Whiskey features 3 different casks: bourbon, sherry, and Port. The expression is bursting with flavor, yet remains perfectly balanced through the sipping experience with a creamy vanilla sweetness and dried fruit notes. Released in 2019, it was triple-distilled at the Dingle Distillery and bottled at 93 proof.

Get your bottle of this artisanal Irish whiskey today!

The nose has aromas of vanilla, oak, and dried fruit aromas. The palate is super-smooth and balanced with vanilla, honey, dried fruit, apricots, and sultanas. The finish is smooth with just a hint of smoke, citrus, and dark chocolate.