Size750mL ProofSuperstition: 86 (43% ABV); Prophecy: 92 (46% ABV)
Crafted at a remote distillery, Jura Prophecy earned a score of 97 points from the Beverage Testing Institute, which said that it was like "drinking buried treasure."
Notify me when this product is back in stock. 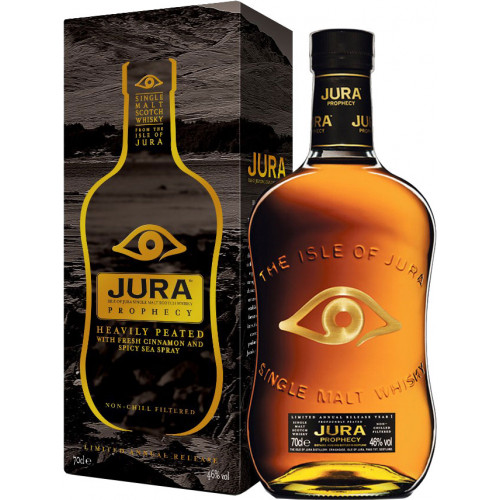 The Jura Distillery was founded in 1810 by Laird Archibald Campbell, and sits alongside the Corryvreckan Whirlpool. Nearly a century after it was opened, the distillery was dismantled due to a land dispute, and remained closed until 1963. Today, the Jura Distillery represents a fusion of modern distillation techniques with traditional craftsmanship, and remains one of the most remote and isolated distilleries on the planet.

Jura Single Malt Scotch Whisky is made from Scottish barley, which is milled at the distillery and mashed with hot water in order to release its natural sugars. Once the barley has been mashed, it is fermented and then distilled through Jura's 28-foot tall copper-pot stills. The stills' unusual size and shape emphasizes the high esther notes of the barley, and produces a noticeably lighter and fruitier whisky.

Isle of Jura Prophecy Single Malt Scotch Whisky pays homage to a prophecy made in the 18th century about a dynastic family that had ruled over the island for nearly three centuries. The prophecy told that the last descendant of the Campbell family to leave the island would be one-eyed and would carry his belongings in a cart drawn by a lone, white horse. In 1938, Charles Campbell, who had been blinded in one eye due to an injury suffered in World War I, fulfilled the prophecy.

Isle of Jura Prophecy Single Malt Scotch Whisky is a limited release whisky that is made by marrying together ancient vintages of the whisky in order to approximate the flavor of the Jura expressions in the 19th century. The whisky has an aroma of peat, olive oil, caramel and dry spices. Notes of nutmeg, cardamom, sea salt and honeyed oak dominate the palate, and give way to a long finish with touches of peat smoke and dry herbs. Isle of Jura Prophecy earned the Silver Medal at the International Wine & Spirit Competition in 2017, and earned a score of 97 points from the Beverage Testing Institute, which said that it was like "drinking buried treasure."