This product is available in: CA, CT, DC, MN, NY Unfortunately, we can't ship to PO Boxes and APO addresses.

Size750mL Proof14 Year Old: 92 (46% ABV); Sauternes and Port: 100 (50% ABV) each
Distilled by one of the last independent distilleries in Scotland, these whiskies are a testament to Scotland's rich heritage and tradition.
Notify me when this product is back in stock.

This product is available in: CA, CT, DC, MN, NY Unfortunately, we can't ship to PO Boxes and APO addresses. 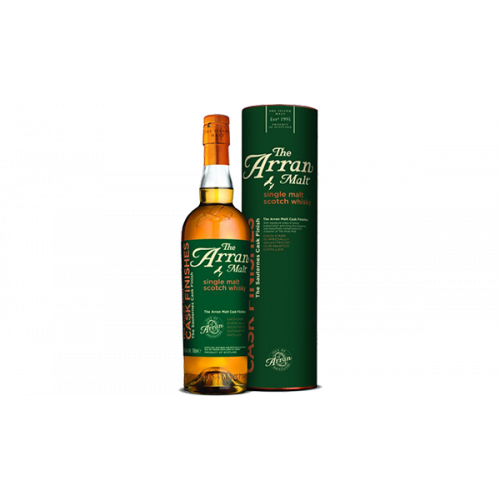 Founded in 1994 by Harold Currie, the Arran Distillery is one of the last remaining independent distilleries in Scotland. "The reason the distillery was built on the Isle of Arran," says James MacTaggart, Arran's master distiller, "was because there is a very good water supply here. In fact, it was tasted and it was decided that it was probably one of the best water supplies in Scotland for making whisky." When the distillery was finally completed in 1995 — construction was halted for nearly a year when a pair of Golden Eagles built their nest near the distillery — it became the first legal distillery on the Isle of Arran in over 150 years.

Following distillation, Arran 14 Year Old Single Malt Scotch Whisky was aged in a combination of first fill sherry and first fill bourbon casks. As a result, the whisky has a copper gold color, along with an aroma of dried fruits, vanilla and toffee. Notes of caramelized oranges and apples on the palate are followed by touches of hazelnuts, dates and tea cake, and lead to a warm, layered finish. The whisky earned the Double Gold Medal at the San Francisco World Spirits Competition in 2012 and the title "Best Island Single Malt"at the World Whisky Awards in 2011.

Arran Single Malt Whisky Sauternes Cask Finish was matured for approximately eight years in traditional oak casks. Following its initial beauty rest, the whisky was finished in used Sauternes casks sourced from an artisan producer of the iconic Bordeaux sweet white wine. During the finishing process, the whisky was carefully monitored by MacTaggart to ensure that it developed the perfect balance of sweet, spicy and fruity notes. The whisky has a golden yellow color, along with an aroma of honeysuckle, melon and bananas. The aroma gives way to notes of honeyed oak, figs and salty tang, and leads to a long, rich finish.

Arran Single Malt Whisky Port Cask Finish was matured for approximately eight years in traditional oak casks. Following its initial beauty rest, the whisky was finished in used Port casks sourced from Portugal. Much as with Arran Sauternes Cask Finish, the whisky was closely monitored by Arran's master distiller in order to ensure that the whisky was well-balanced yet bold. The whisky has a reddish-bronze color, along with an aroma of red fruits, roasted nuts and vanilla spices. The palate is layered, with touches of fruits and spices complementing notes of cinnamon, apples and raisins, and leading to a sweet, honeyed finish.

14 Year Old: Copper-gold color. Aroma of dried fruits, vanilla and toffee. Notes of caramelized oranges and apples on the palate are followed by touches of hazelnuts, dates and tea cake. Warm, layered finish.