This product is available in: DC, IL Unfortunately, we can't ship to PO Boxes and APO addresses.

Size750mL Proof96 (48% ABV)
This sherried whisky had Aberlour pick out some exceptional Spanish oak casks that used to hold Oloroso sherry. These impart the signature Aberlour profile with plenty of fruity sweetness and richness.
Notify me when this product is back in stock.

This product is available in: DC, IL Unfortunately, we can't ship to PO Boxes and APO addresses. 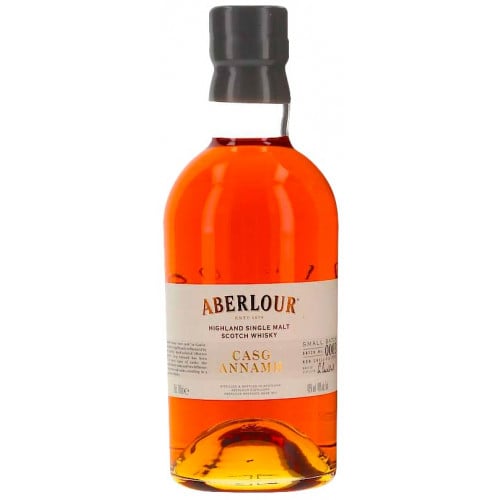 Situated at the confluence of the Rivers Lour and Spey in Strathspey, Scotland, the Aberlour Distillery was founded in 1879 by James Fleming. Fleming, who was the son of a local tenant farmer, ultimately became a grain dealer in the middle of the 19th century. At the time, he counted a number of whisky distilleries as his customers, and after purchasing more barley than he was able to sell, Fleming decided to open a distillery himself.

In 1898, 3 years after Fleming's passing, a fire consumed much of Aberlour Distillery and its inventory of whisky. Following its destruction, the distillery was rebuilt under the supervision of Charles Doig — Scotland's foremost expert of whisky distilleries at the time. While the composition of the distillery and its equipment has inevitably been altered over the past century, Aberlour's commitment to traditional craftsmanship and quality single malt whisky has remained unchanged.

Casg Annamh is Gaelic for 'Rare Cask', signifying a release that is crafted with a limited number of exceptional casks. The casks in point are Spanish oak ones that used to hold Oloroso sherry. These impart the signature Aberlour flavor with an additional layer of richness and fruity sweetness. Non-chill filtered and bottled at 96 proof, this is a fun and unique spirit for all the sherried whisky lovers out there.

It's a rich & sweet nose with fruity orange, cherry, and raisin notes as well as a touch of ginger. The fruity sweetness continues on the palate with apple and peach notes. Cinnamon, spice, licorice, and cloves make an entry. Finishes long and fruity with hints of spice.