Learn more
Size750mL Proof100 (50% ABV) *Please note that the ABV of this bottle may vary
Discover the perfect marriage between the complex character of a Scottish Single Malt and the luxurious Italian Amarone wine. Adored for its rich, chocolaty character with flavors of cherry, Turkish delight and dark chocolate.
Notify me when this product is back in stock. 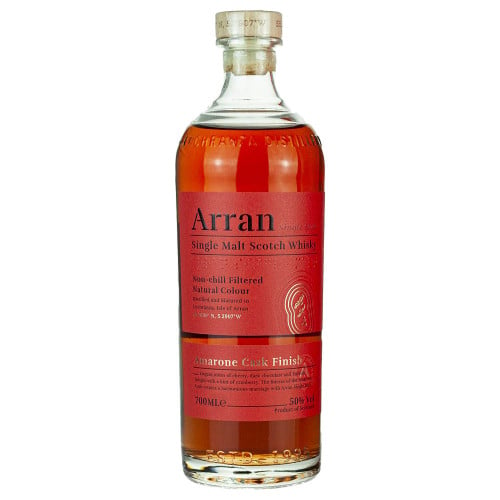 One of the handful of independent distilleries in Scotland, the first Arran distillery was opened about 25 years ago in Lochranza on the Isle of Arran off the west coast of Scotland. Their second location opened its doors in the south of the island at Lagg. The local terroir is essential to their traditional whisky making – at Arran, they say it's all about the water. Sourcing the rainwater pooling at Loch na Davie behind the distillery, the clear and pure water is where their natural and unadulterated Single Malts begin with the warm microclimate and sea breezes providing the ideal conditions for production. Sourcing concerto barley and employing old, artisanal methods, nothing artificial ever finds its way into Arran whiskies that boast a natural color and are not chill filtered.

Arran Amarone Cask Finish is the perfect marriage of rich, red wines and their signature Arran Single Malt flavor. Aged in traditional oak casks for several years, this expression is finished in a selection of Amarone wine casks, sourced from an artisan producer in the Veneto region in Italy. Amarone is a dry red wine that's high in alcohol and features plenty of dark fruit flavors. Bottled at 100 proof, Arran Amarone Cask Finish has a pink hue due to the red wine ageing and a rich, chocolaty character with flavors of cherry, Turkish delight and dark chocolate. This is an intriguing combination of a complex Scottish Single Malt and a luxurious Italian wine.

Pick up your perfect marriage between Scottish Single Malt and Amarone wine!

Slightly pink hue. The nose greets with cherry, Turkish delight and chocolate. The palate is rich with flavors of poached pears, honey and a touch of cranberry. The finish is sweet with more notes of pears, Turkish delight, cherries and dark chocolate.