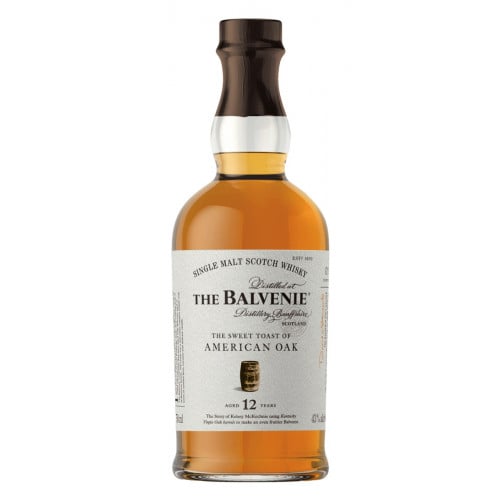 Balvenie Single Malt Whisky is made from fresh, plump barley grown on Balvenie Mains, a 1,000-acre farm situated adjacent to the distillery (the farm has been the distillery's source for barley for over a century). After the barley is harvested, it is malted at the distillery with spring water sourced from the rolling Speyside hills that overlook the distillery. During the malting process, the barley is turned up to four times a day in order to ensure that it germinates evenly (Balvenie is the only single malt Scotch whisky distillery that continues to grow and malt its own barley).

Once the barley has been malted, it is milled and mashed at the distillery before being fermented using a proprietary strain of yeast. Following fermentation, the wash is distilled twice, first through Balvenie's copper-pot wash still and then again through its copper-pot spirit still. "The most important reason for using a copper still," explains Dennis McBain, Balvenie's coppersmith, "is that it acts as a catalyst. It removes any sulfur which may be carried over from the fermentation process prior to distillation." McBain, who joined Balvenie Distillery in 1959, is one of the oldest coppersmiths remaining in the industry.

Inspired to produce an even fruitier, sweeter Balvenie, Apprentice Malt Master Kelsey McKechnie had the bright idea to import Virgin Oak barrels from Kentucky. After deep toasting them at The Balvenie Cooperage, they were filled with Balvenie aged in ex-bourbon barrels. The result is a delectably complex whisky with notes of candied fruit, coconut and delicate vanilla.

Lusciously malty with sweet fudge, followed by citrus, oak and vanilla aromas with layers of spicy oak, notes of ginger and cinnamon. The palate has notes of candied orange and lemon peel, vanilla toffee and butterscotch, layers of blossom honey, some melted brown sugar and oak spices at the end. The finish is rich and malty with gentle waves of oak vanilla and subtle spices.