Size750mL Proof92 (46% ABV)
This is a deliciously fragrant, vibrant, and fruity blend of malt whiskies from distilleries such as the Linkwood Distillery (39%), the Clynelish Distillery (29%), and the Benrinnes Distillery (20%). It's bottled at 92 proof without chill-filtration and coloring. 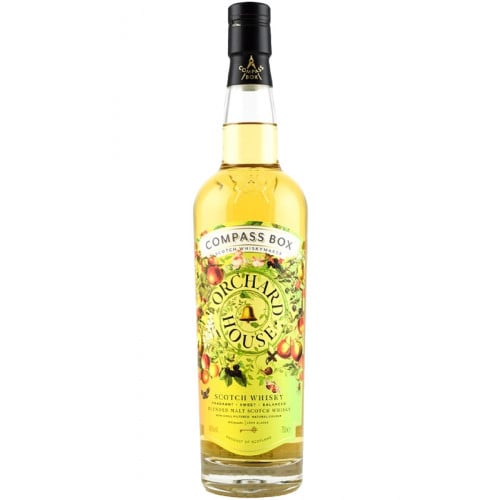 Compass Box Orchard House is a blended malt Scotch that is a fresh addition to their permanent lineup. It's a fruity and spirit-driver expression that was crafted by lead whisky maker James Saxon in 2021. The blend includes several single malts that come from the Linkwood Distillery (39%), the Clynelish Distillery (29%), and the Benrinnes Distillery (20%). Bottled at 92 proof, it's a fragrant, vibrant, bright, and fruity spirit with notes of orchard fruit, pineapple, citrus zest, Earl Grey tea, ginger, honey, and vanilla. It's a non-chill-filtered expression that's bottled without any additional coloring.

Get your bottle of this deliciously fruity blended malt whisky today!

Orchard fruit greets the nose with prominent apple and pear aromas followed by pineapple, citrus zest, and Earl Grey tea. The palate is fruity with malt and ginger notes, as well as honey, strawberry, and buttery vanilla notes. The finish is smooth and vibrant.