Size750mL Proof102.4 (51.2% ABV)
Highland Park Freya is a cask strength single malt with a light golden hue, lovely flavor profile, and a delicate heather-smoke aroma. It aged for fifteen years in sherry wood and bottled at cask strength.
Notify me when this product is back in stock. 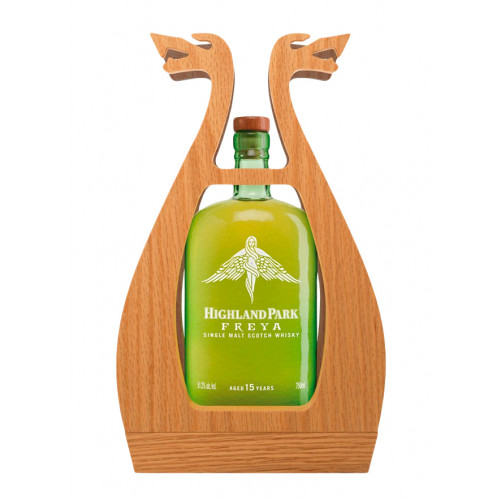 Highland Park distillery was founded by Whisky smuggler Magnus Eunson in 1798 and legend has it that he used his position as a church officer to conceal Whisky beneath the pulpit to keep it out of sight of interfering governmental types. What we do know for sure is that Highland Park is the northerly most distillery in Scotland — sitting way out on the island of Orkney in the far North Sea, just below the Arctic Circle. It’s as close to Iceland as it is to London.

Because the name is “Highland Park,” it may be easy to think that means their whisky is made in the Highland style. But it’s quite different. In character, their spirit is closer to a midpoint between Lowland style and peated Islay single malts. And it’s signature style and dedication to superior quality keep it broad range of whiskies in high demand. In fact, spirits journalist and whisky legend Michael Jackson called Highland Park, “The greatest all-rounder in the world of malt whisky.”

Highland Park Freya was the third in a four-part Valhalla Series of limited edition single malts named after Norse deities — this one released in 2014. It’s a lightly peated and delicate dram aged fifteen years in ex-sherry casks. Freya was the Norse goddess of love, beauty, gold, and war. Highland Park obviously took the naming seriously, delivering a golden-hued dram with a luscious palate and lovely, complex flavor profile. But do not sell this goddess short… at 51.2% ABV it’s a powerful dram.