Learn more
Size750mL Proof90.2 (45.1% ABV) *Please note that the ABV of this bottle may vary
This 26-year-old expression was distilled in 1994 and bottled in 2020. It continues in the mysterious character of the series where the exact casks used are known only to the head distiller. Non-peated, the oak highlights its delicate citrusy and fruity notes.

This is a PRE-ORDER: Bottles will be shipped mid-October.

Any orders containing this bottle will not be shipped until Bruichladdich Black Art 8.1 is available for shipping.
Notify me when this product is back in stock. 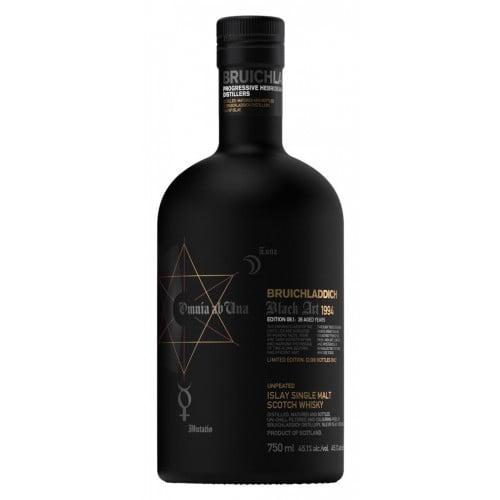 Skip to the beginning of the images gallery
Pre-Release

The Bruichladdich Black Art 8.1 continues the series' tradition of shrouding its expressions in a veil of mystery where the exact casks used to age the spirit are only known to the head distiller. This is Hannett's 4th release and 8th overall. It was distilled in 1994 and bottled in 2020, making it a 26-year-old single malt that was matured entirely on Islay. It is, of course, non-chill filtered and has no added coloring. This non-peated expression has the oak highlighting the delicate citrusy and fruity notes and is limited to 12,000 individually-numbered bottles.

The nose opens with citrusy and zesty notes of lime and orange, followed by caramel, honey, oak, dried fruit, tobacco, maple syrup, and nutty overtones. Pleasant oaky sweetness is balanced by citrusy notes on the soft and light palate, along with maple syrup, walnut, toasted oak, and spice, along with some vanilla and caramel. Finishes with gentle caramel, dried fruit, lemon cake, milk chocolate, and hazelnuts.