$1,321.99
Caskers Rewards members earn up to 66 store points back when buying this bottle.

Size750mL Proof81 (40.5% ABV)
This special edition is an exclusive release of 1,206 bottles in partnership with renowned photographer, Søren Solkær.
Notify me when this product is back in stock.

Caskers Rewards Caskers Rewards members earn up to 66 store points back when buying this bottle. Learn more
Out of stock
Skip to the end of the images gallery 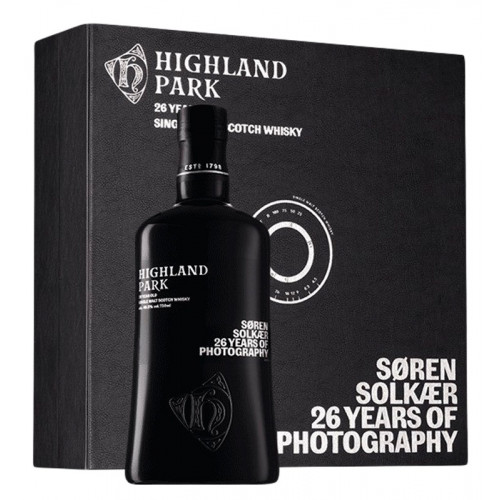 Today, over two centuries after its founding, Highland Park Distillery remains one of the few Scottish distilleries that continues to hand-turn, malt, and peat its own barley. "You have to be careful here on the malting floor," says Eric Tait, Highland Park's Maltman. "You find it can get a wee bit slippery underneath. I have to turn the malt every eight hours to prevent the roots from getting tangled and to get it all aerated properly. The airing also helps it to grow. The malt will be on the floor for seven days, and I'm running five floors at the moment."

Highland Park is proud to introduce Highland Park Søren 26 Year, an exclusive release of 1,206 bottles in partnership with renowned photographer, Søren Solkær. Rich and smoky, the whisky has been crafted from a combination of exceptional casks hand-selected by Master Whisky Maker, Gordon Motion.

This special edition is housed in a bespoke leather box paired with an exclusive leather-bound book showcasing photographic work from the 26 years of Søren’s career. matured predominantly in sherry-seasoned American oak casks and first fill Bourbon casks this whisky has a rich and spicy flavor with light heathery peat smoke and a long, lingering finish.