Learn more
Size750mL Proof91.4 (45.7% ABV) *Please note that the ABV of this bottle may vary
Highland Park 25 Year Old's remarkable complexity owes a great deal to maturation in a high proportion of first-fill sherry-seasoned European oak casks. Using these finest quality casks imparts an astonishing flavor to the whisky as it matures – dark and full-bodied with a rich and earthy spiciness, yet brimming with sweet dried fruits, buttery fudge and warm vanilla. Limited quantities available.
Notify me when this product is back in stock.

This product is available in: DC, MI Unfortunately, we can't ship to PO Boxes and APO addresses. 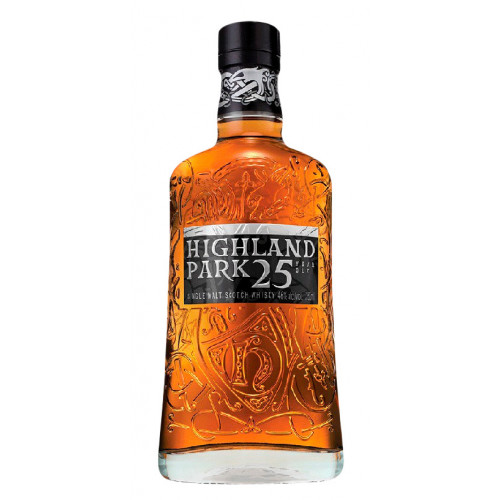 Today, over two centuries after its founding, Highland Park Distillery remains one of the few Scottish distilleries that continues to hand-turn, malt, and peat its own barley, using locally cut peat from the nearby Hobbister Moor. The malt is peated to 20 parts per million phenol, and then mixed with unpeated malt produced on the Scottish mainland.. "You have to be careful here on the malting floor," says Eric Tait, Highland Park's Maltman. "You find it can get a wee bit slippery underneath. I have to turn the malt every eight hours to prevent the roots getting tangled and to get it all aerated properly. The airing also helps it to grow. The malt will be on the floor for seven days, and I'm running five floors at the moment."

In 2013, Highland Park 25 Year Old became the first spirit ever to receive a perfect 100-point score — not to mention the Chairman’s Trophy for Best of Category — at the Ultimate Spirits Challenge. With an unmatched depth and vibrancy, this legendary expression is crafted in small batches and matured in predominantly first fill European oak casks, each seasoned with Oloroso sherry and hand chosen by Master Whisky Maker Gordon Motion.

Aromas of acacia honey and dried fruit balance with notes of heathery peat smoke. The palate is full-bodied with a rich and earthy spiciness, yet brimming with sweet dried fruits, buttery fudge and warm vanilla.