Size750mL Proof92 (46% ABV)
The newest addition to Ardbeg's core lineup is the oldest one yet. Balanced and complex, this 25-year-old is proof that age can't tame Ardbeg's signature smokiness. 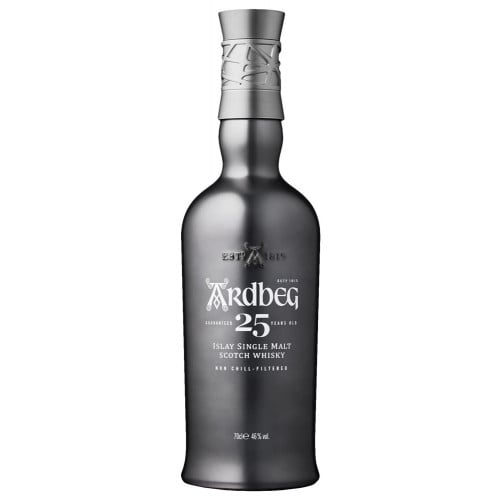 Recently, Ardbeg added the youngest whisky to their core range in the form of the 5-year-old Wee Beastie. With the Ardbeg 25 Years Old, they are once again bolstering the core lineup ― this time on the opposite side of the age range. The oldest expression of Ardbeg's regulars is proof that age doesn't tame its signature smokiness. It's a complex and exquisitely-balanced single malt that comes from rare casks and is bottled at 92 proof in a sleek and modern gun metal bottle. Creamy, earthy, fruity, sweet, and smoky ― it's a delight for the senses.

Smoked cream, peppermint, toffee, pine resin, and fennel greet the nose. Earthy bonfire smoke aromas are balanced by herbal and fruity notes. It's lively and creamy on the palate with a pleasant sweetness, lemon sherbet, and fruit, as well as toffee, chili pepper, and tar. The finish is long and mellow with lingering cream, fudge, and antiseptic notes.