Learn more
Size750mL Proof86.8 (43.4% ABV) *Please note that the ABV of this bottle may vary
This whisky is the oldest expression in the newest range of single malts from Mortlach Distillery, nicknamed the “Beast of Dufftown.”
Notify me when this product is back in stock. 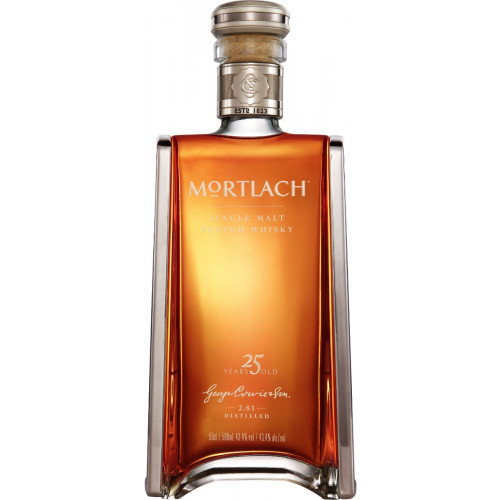 Mortlach 25 Year Old Single Malt Scotch Whisky is the oldest expression in Mortlach’s newest range of single malts. Presented in a bottle designed by Laurent Hainaut, the whisky has a deep, golden amber color. A woody, highly fragranced nose is balanced by tropical aromas, particularly mangos, pineapples and peaches. The palate develops with white chocolate, ginger and a light smoke, and leads to a sweet finish with more ginger and some cinnamon spice.

Deep, golden amber color. Woody, highly fragranced nose is balanced by tropical aromas, particularly mangos, pineapples and peaches. The palate develops with white chocolate, ginger and a light smoke, and leads to a sweet finish with more ginger and some cinnamon spice.