Size750mL Proof86 (43% ABV)
Aged for 25 years, this whisky earned a score of 98 points at the Ultimate Spirits Challenge in 2014, which named it the Best Single Malt Scotch Whisky in the World.
Notify me when this product is back in stock. 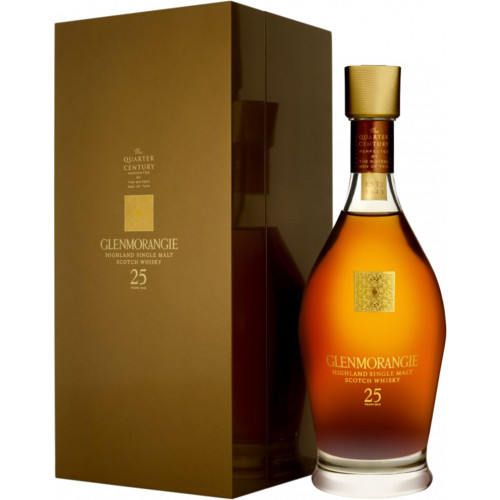 Following distillation, Glenmorangie The Quarter Century 25 Year Old Highland Single Malt Scotch Whisky is matured in a variety of different casks, including American white oak, Oloroso sherry and French Burgundy. The rarest and oldest member of the Glenmorangie family, the whisky has an aroma of dried fruits, plums and milk chocolate that give way to deep notes of blackberries, bramble jelly and raspberries on the palate. The finish is long and gentle, with a touch of spice and oak.

Glenmorangie The Quarter Century earned a score of 98 points at the Ultimate Spirits Challenge in 2014, which named it the Best Single Malt Scotch Whisky in the World. In addition, it earned the Double Gold Medal at the San Francisco World Spirits Competition in 2013.

Aroma of dried fruits, plums and milk chocolate that give way to deep notes of blackberries, bramble jelly and raspberries on the palate. The finish is long and gentle, with a touch of spice and oak.