Size750mL Proof95.2 (47.6% ABV)
Made from just two parcels of casks, Tobias & the Angel is a culmination of two decades of whiskymaking.
Notify me when this product is back in stock. 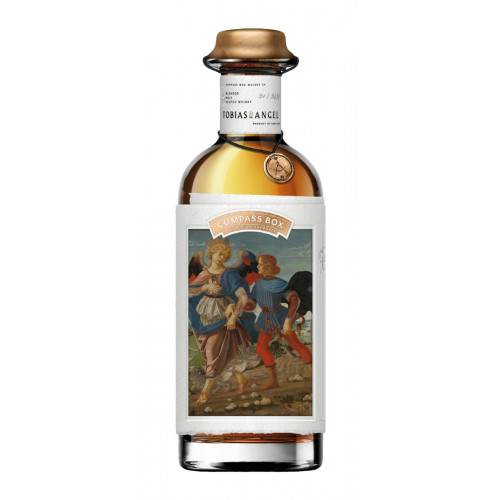 About Compass Box Tobias and the Angel Blended Scotch Whisky

Compass Box Hedonism is a unique blend of grain Scotch whisky. Nearly a century ago, grain whiskies were common across Europe but were overtaken in terms of popularity when the larger distilleries in Scotland began focusing on single malt whisky. "When good Scotch grain whisky is aged in good quality American oak casks, the results can be stunning," says Glaser.

We’ve chosen TOBIAS & THE ANGEL is inspired by a beautiful painting from the Andrea del Verrocchio’s studio in Florence during the 15th century. The naïve boy and the divine angel symbolize the relationship between aromatic smoke, a hallmark of Caol Ila Distillery, and the ethereal fruitiness and complexity of Clynelish. TOBIAS & THE ANGEL is a unique exploration of two distinct flavor profiles. Due to the age of the single malts involved, it is also Compass Box’s rarest expression.