Size750mL Proof97.4 (48.7% ABV)
This incredible whisky was originally filled into gentle third fill bourbon casks and lay untouched in a warehouse until 2012, when it was re-casked into fresh bourbon barrels, and then finished in French oak in 2017. It scored a perfect 10/10 score by the Malt Review.
Notify me when this product is back in stock. 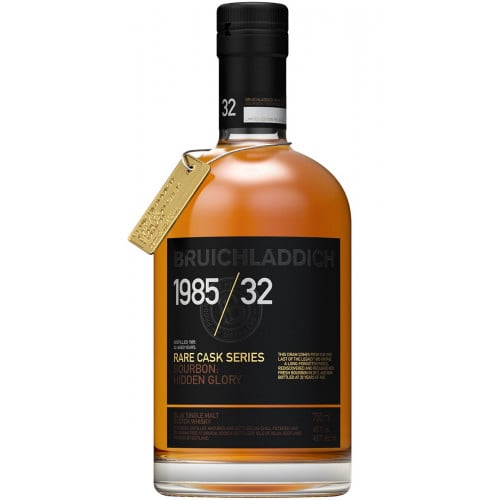 The modern Bruichladdich Distillery is known as the most experimental and adventurous of the Scottish distilleries. Head distiller Adam Hannett has released a series of three very old Bruichladdich whiskies that he describes as ‘The last of their kind.”  The final three parcels of casks from distillations in 1984, 1985 and 1986 have now been bottled at the Islay distillery. Adam says: “These rare, old single malts are a direct link to our past, to the men who made truly special spirit here while facing very different circumstances to those which we enjoy today. Testament to their skill and hard work it was laid down to mature by the shores of Loch Indaal, unaware of what the future might bring.

This 1985: Hidden Glory expression “comes from the final 22 casks of legacy stock originally filled into gentle third fill bourbon casks that lay untouched until 2012 when it was re-casked into fresh Bourbon before a final coup de grace in French oak from one of the greatest French chateaux” (producer).

This whisky was originally filled into gentle third fill bourbon casks and lay untouched in a warehouse until 2012, when it was re-casked into fresh bourbon barrels, and then finished in French oak in 2017. This unpeated Islay is a limited release of only 4,200 bottles.

An amazing array of notes on the nose: blood orange, nectarines, banana bread, desiccated coconut, vanilla custard, then more oral and nutty tones, geranium, marzipan, walnut, and heather honey. On the palate is warm, nutmeg a hint of fruit; raspberry, blackcurrant jam and ripe plum, all perfectly balanced by years in American oak. Lemon meringue and coconut - bounty bar sweet. It opens continually to reveal layer upon layer of complexity. The finish is long and gentle, the oak influence is strong with waves of soft vanilla wafer, toffee and sandalwood. Then lemon barley sugars, a hint of salted caramel and apricot syrup.