Learn more
Size750mL Proof92 (46% ABV) *Please note that the ABV of this bottle may vary
Aged for a minimum of 40 years, this single malt Scotch Whisky earned a score of 95 points from Whisky Advocate.
Notify me when this product is back in stock. 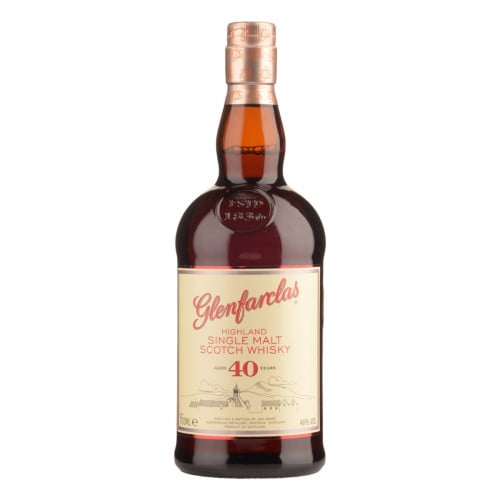 Glenfarclas Single Malt Scotch Whisky is made from freshly harvested barley, which is steeped in water sourced from the heather-clad slopes of the Ben Rinnes mountain. The crystal-clear spring water, which cascades down the 3,000-foot mountain through peat and granite, is the lifeblood of the Glenfarclas Distillery. After the barley is malted, it is milled and mashed before being fermented using a proprietary strain of cultured distiller's yeast.

The wash — the liquid that remains after fermentation — is then distilled twice through Glenfarclas' copper-pot stills. While most distilleries use steam-powered stills as they are more efficient and preserve the lifespan of the still, Glenfarclas Distillery continues to use traditional direct-heated stills in order to preserve the traditional flavors of the whisky. After distillation, the heads and tails of the distillate (the whisky produced at the beginning and end of the distillation process) are discarded and only about 15% of the distillate — the heart of hearts — is preserved for maturation.

Glenfarclas 40 YO Single Malt Scotch Whisky is matured for a minimum of four decades in used oak casks. As a result, the single malt has an aroma of chewy leather, walnuts and chocolate covered raisins, which gives way to lush notes of cocoa beans, woody tannins, dates and dried figs. The lingering finish, which is never too oaky, has hints of toffee and caramel.

Glenfarclas 40 Year Old Single Malt Scotch Whisky earned a score of 95 points from Whisky Advocate, which also named it the Editor's Choice and called it "a very good value for its age."

Aroma of chewy leather, walnuts and chocolate covered raisins, which gives way to lush notes of cocoa beans, woody tannins, dates and dried figs. Lingering finish, which is never too oaky, has hints of toffee and caramel.