Learn more
Size750mL Proof89.2 (44.6% ABV) *Please note that the ABV of this bottle may vary
From the Bruichladdich “The Last of Their Kind” series, this ultra-rare 1986 expression is comprised of the very last seven casks of delicate, floral Bruichladdich from 1986.
Notify me when this product is back in stock. 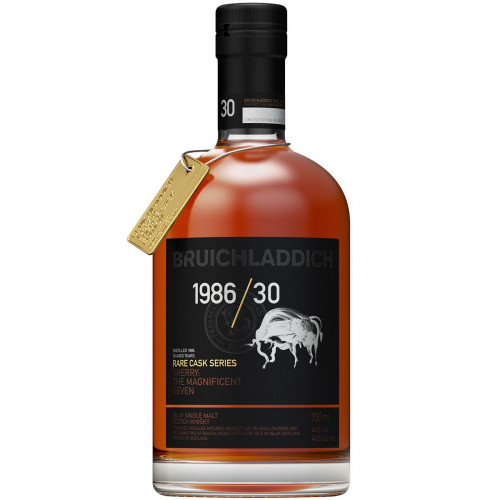 The modern Bruichladdich Distillery is known as the most experimental and adventurous of the Scottish distilleries. Head distiller Adam Hannett has released a series of three very old Bruichladdich whiskies that he describes as ‘The last of their kind.” A series of three very old whiskies from 1984, 1985, and 1986 that Adam says are, “rare, old single malts are a direct link to our past, to the men who made truly special spirit here while facing very different circumstances to those which we enjoy today. Testament to their skill and hard work it was laid down to mature by the shores of Loch Indaal, unaware of what the future might bring.”

This ultra-rare 1986 "The Magnificent Seven" expression is comprised of seven casks of delicate, floral Bruichladdich that have been subject to intense, full-term sherry maturation. First filled into Oloroso butts in 1986, this spirit lay untouched until 2012 when it was re-casked in Pedro Ximinez butts from winemaker Jan Pettersen at Bodega Fernando de Castilla in Jerez, Spain.

Dried fruit - raisins, prunes and Christmas cake on the nose. Muscovado sugar, a hint of hot sand and candied peel, dried tea leaves, pipe tobacco and leather rolled in PX. The palate raises the bar with further with sweet PX notes, raisins, dried figs, dates, grape sugar. Leather, cigar boxes and Christmas cake. The complexity and balance is retained as the marine freshness and fruity notes of apricot and apple come through from the Bruichladdich DNA. The finish is ever-ending with sweet fruit, PX, salted caramel, cinder toffee and a hint of smoke.