Size750mL Proof86 (43% ABV)
Aged for ten years in bourbon casks and two years in Oloroso Sherry casks, this Whisky earned a score of 93 points from Wine Enthusiast.
Notify me when this product is back in stock. 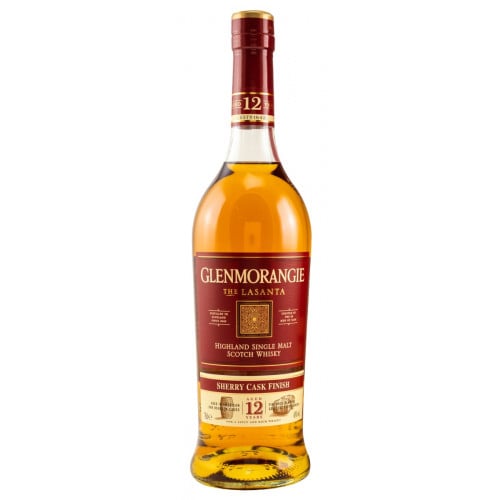 Following distillation, Glenmorangie Lasanta 12 Year Old Single Malt Scotch Whisky is aged for a minimum of ten years in casks that were previously used to mature bourbon. After its decade-long beautyrest, the single malt is double-barreled, or finished, for an additional two years in casks that were previously used to mature Oloroso Sherry. Oloroso Sherry is a type of fortified wine from Spain known for its dark and nutty flavors. "The word Lasanta is a Scottish Galeic word that means warmth for passion," says Dr. Bill Lumsden, Glenmorangie's Master of Whisky Creation. "It gives you a clue to the rich, warm and spicy flavors" found in Glenmorangie Lasanta.

The Whisky earned the Double Gold Medal at the San Francisco World Spirits Competition in 2010 and 2013. In addition, it earned a score of 93 points from Wine Enthusiast, which called the Whisky a "reward with mouthwatering spicy notes of clove, cassia bark and a hint of orange peel."

Rich, mahogany color along with an aroma of citrus, herbs and chocolate. Notes of sweet sherry, caramelized oranges, walnuts and toffee on the palate. Finish is long and satisfying, with touches of almonds, spiced oranges and cloves.