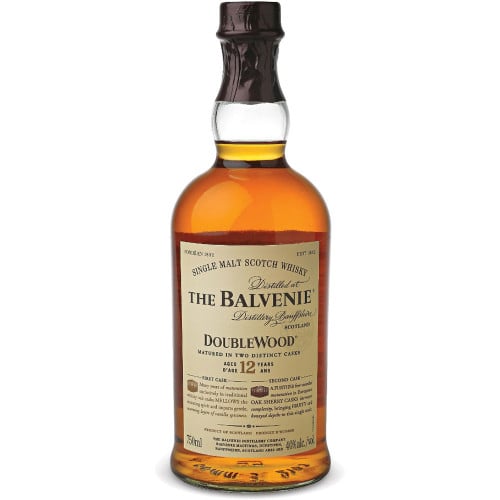 Once the barley has been malted, it is milled and mashed at the distillery before being fermented using a proprietary strain of yeast. Following fermentation, the wash is distilled twice, first through Balvenie's copper-pot wash still and then again through its copper-pot spirit still. "The most important reason for using a copper still,"explains Dennis McBain, Balvenie's coppersmith, "is that it acts as a catalyst. It removes any sulphur which may be carried over from the fermentation process prior to distillation." McBain, who joined Balvenie Distillery in 1959, is one of the oldest coppersmiths remaining in the industry.

Following distillation, The Balvenie 12 Year Old Doublewood Single Malt Scotch Whisky is matured in traditional, American oak casks before being double-barreled, or finished, in European oak casks that were previously used to mature sherry. As a result of spending a dozen years in oak casks, the whisky has an aroma of citrus, honey and vanilla. The aroma gives way to notes of red fruits (particularly berries and plums) on the palate, along with hints of sherry, caramel and butterscotch. The finish is long and warming, with a slightly sweet touch. Balvenie 12 Year Old Doublewood earned the Gold Medal at the San Francisco World Spirits Competition. In addition, the whisky earned a score of 94 points from Wine Enthusiast, which called it "silky and downright succulent."

Pick it up today!

Aroma of citrus, honey and vanilla. Notes of red fruits (particularly berries and plums) on the palate, along with hints of sherry, caramel and butterscotch. Finish is long and warming, with a slightly sweet touch.