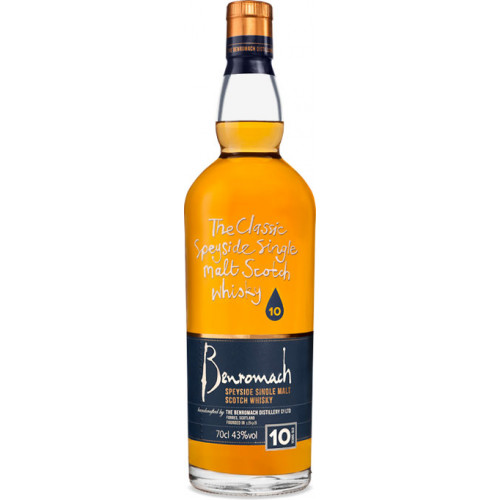 Situated on the outskirts of the ancient Royal Borough of Forres, Benromach Distillery was founded in 1898 by Duncan McCallum, a former distiller at the Glen Nevis Distillery in Campbeltown, and FW Brickman, a former spirits broker from Edinburgh. After just two short years of operation, McCallum and Brickman were forced to close the doors to Benromach Distillery and since then, the distillery has changed hands a number of times.

Benromach 10 Year Old Speyside Single Malt Scotch Whisky is made from a variety of malts (Chariot, Golden Promise and Optic) that are lightly peated to the distillery's exact specifications. After sourcing the malted barley, the distillers at Benromach mill it through a four roller Boby mill and then mash it inside a 1.5 ton, stainless steel semi-lauter mash tun. Once the grains have been mashed, they are fermented with two varieties of yeast — a brewer's yeast and a distiller's yeast — and then distilled twice through Benromach's copper-pot stills. "It takes approximately 7,500 liters of wash to create only 600 liters of Benromach," says Chris Riesbeck, Gordon & MacPhail's brand ambassador.

As a result, Benromach 10 Year Old Speyside Single Malt Scotch Whisky has a nose that is rich in its sherry influence, with notes of fruits, nuts and delicate spices. The initial notes of dark cherries and berries give way to a malty creaminess with a touch of peat, and lead to a long, fruity finish.

Benromach 10 Year Old earned the Gold Medal at The Fifty Best Tasting Competition in 2011 and was awarded the title "Best Single Malt Scotch Whisky" at the Hong Kong International Wine and Spirit Competition in 2012. In addition, it earned a score of 95 points from the Ultimate Spirits Challenge in 2013.

Nose of cinnamon, fruits, nuts and chocolate. Initial notes of berries and dark cherries with a malty creaminess and a hint of peat. Finish is long and lingering, with subtle notes of fruit.