Learn more
Size750mL Proof80 (40% ABV) *Please note that the ABV of this bottle may vary
This incredible Glendullan is decorated with a jumping trout, the sigil of House Tully, from the cult-classic HBO series Game of Thrones.
Notify me when this product is back in stock. 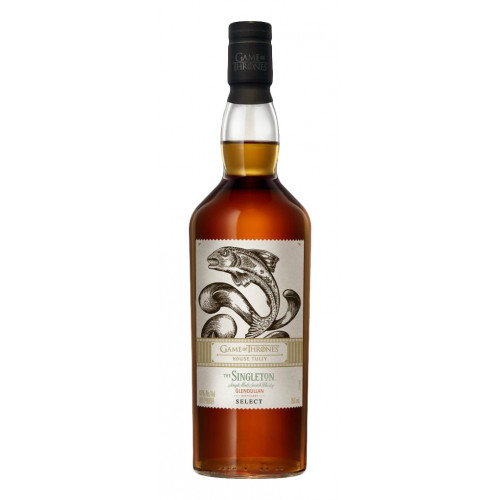 About Game of Thrones House Tully Singleton of Glendullan Select

Glendullan is situated in Dufftown, the whisky capital of the world. As one of the busiest whisky epicenters, it is home to some of the greatest Scotch whiskies ever created. Founded in 1898, by William Williams & Sons from Aberdeen, the distillery was actually decreed by King Edward VII in 1902. The Singleton brand is actually manufactured in three Scottish whisky distilleries; one of which is Glendullan.

This whisky has bright notes of citrus and clove that open on the nose followed by a palate of sweet fruit and vanilla bean and a warm aromatic finish. This incredible Glendullan is decorated with a jumping trout, the sigil of House Tully.

Spice and rich and creamy aromas of sandalwood and fruit on the nose. The palate is sweet with spice, fruits and deep notes of violets and orange peel. The finish is intense, warm and dry with an aromatic aftertaste.