Be the first to review this product
This signature Glenmorangie earned a Gold medal at the 2018 San Francisco World Spirits Competition.
$34.99
Add to Wish List

Glenmorangie whiskies are made using malted barley, which is mashed and fermented with water sourced from the Tarlogie Spring. The water produced from the spring, which spends nearly a century underground being filtered through layers of limestone before it is extracted, is unusually rich in minerals. In the 1980s, when development in the area threatened the spring's water quality, Glenmorangie purchased 600 acres of land around the spring in order to ensure a consistent and everlasting supply.

After the barley has been fermented, the wash is twice distilled through Glenmorangie's copper-pot stills by a team of 16 distillers known as the Sixteen Men of Tain. Glenmorangie's stills are equipped with relatively small boiler pots, which increases the exposure of the whisky to the copper, resulting in a more pure flavor. In addition, the stills are nearly seventeen feet tall — the tallest of any distillery in Scotland — and as a result, produce a lighter, more refined whisky.

The original expression of the elegant, floral Glenmorangie range this ten-year-old single malt, is made by marrying the delicate spirit of Scotland's tallest stills, with first and second fill American white oak casks. After maturing for ten years in a range of famous slow-grown and air-dried ex-bourbon 'designer casks' from Missouri, this raw spirit develops a perfect balance between sweetness and complexity. The result is a mature soft, mellow and creamy spirit.

Aromas of citrus and ripening peaches are softened by the aroma of vanilla. The palate is sweet with vanilla followed by a burst of floral fruitiness. The finish is clean with hints of citrus and peach. 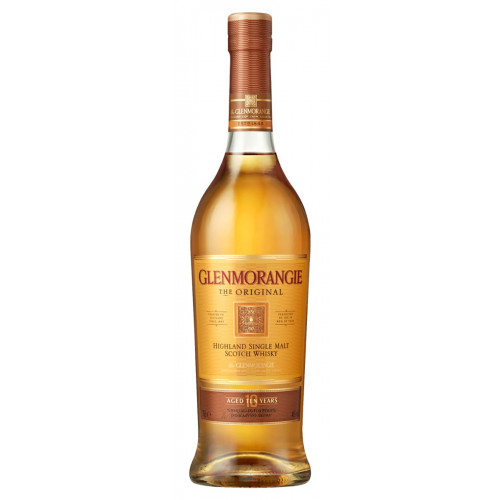