Learn more
Size750mL Proof85 (42.5% ABV) *Please note that the ABV of this bottle may vary
A part of Glenglassaugh's Core Range, this 40-year-old Highland single malt was selected by Master Distiller Billy Walker and bottled at 85 proof without chill filtration and coloring.
Notify me when this product is back in stock. 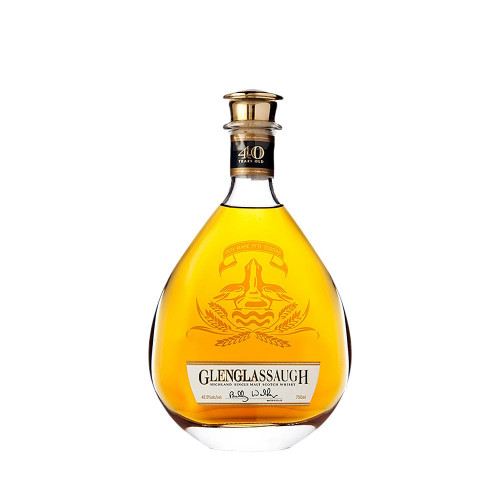 Eager to satisfy the growing demand for high-quality whisky from customers of his grocery store, James Moir established the Glenglassaugh Distillery in 1875. At the time, it was commonplace for store owners to distill or blend their own whisky (a store owner by the name of Johnnie Walker began blending whisky in the 1830s for his own customers). The location of Glenglassaugh Distillery — it is situated on the outskirts of Banffshire in the Highlands region of Scotland — was chosen because it offered ready access to an incredibly clean and pure water supply: Glassaugh Springs. In addition, the area is surrounded by fields of ripe, plump barley that are ideal for distillation.

For over a hundred years, the Glenglassaugh Distillery operated at its original site, producing single malt whiskies that were best known for their starring roles in renowned blended Scotch whiskies, including Cutty Sark and the Famous Grouse. In 1986, however, production at the distillery ceased, and would not be restarted until 2008, when new owners took over Glenglassaugh. While the distillery is again producing new whisky, the new owners discovered they had purchased quite a bit more than the famous distillery itself: the purchase also included a cache of some 400 casks of aging Glenglassaugh Single Malt whisky, each more than twenty years old.

Their core range, therefore, consists of young as well as some extremely old whiskies. This Glenglassaugh expression is a 40-year-old whisky, meaning it was distilled before the period when the distillery was closed. Selected by Master Distiller Billy Walker, it's a rich and rare Highland single malt with tropical fruit and sherry notes. The expression is bottled at 85 proof without chill filtration and coloring, letting its complex character shine in its full glory.

Get your bottle of this rare 40-year-old Highland single malt today!

Sweet tropical fruit aromas greet the nose with banana, pineapple, mango, and a touch of sherry. The palate is rich and sweet with complex sherry, toffee, apple, and tropical fruit notes along with a touch of ginger and cocoa. The finish is rich with sherry notes.