$1,165.99
Caskers Rewards members earn up to 58 store points back when buying this bottle.

Size750mL Proof86 (43% ABV)
For this expression, Glenfiddich Malt Master Brian Kinsman travelled to Canada to pick grapes by moonlight at -10˚C.
Notify me when this product is back in stock.

Caskers Rewards Caskers Rewards members earn up to 58 store points back when buying this bottle. Learn more
Out of stock
Skip to the end of the images gallery 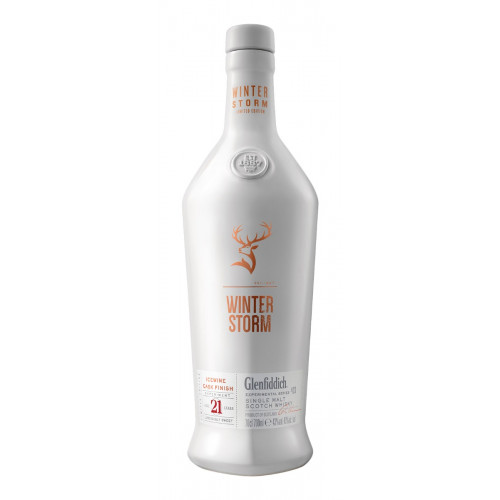 Glenfiddich Single Malt Scotch is made exclusively from malted barley, which is milled and mashed with water sourced from Robbie Dhu spring. The crystal clear spring water, which is bottled directly at the source, is incredibly pure — the distillery purchased 1,200 acres around the spring decades ago in order to protect its unique water supply. After the barley has been mashed, it is fermented in wooden fermentation tanks made of Douglas Fir.

While wooden fermentation tanks are more expensive and difficult to maintain as compared to stainless steel tanks, they absorb a portion of the heat generated during fermentation, and thus, enable a slower and longer fermentation process. Following fermentation, the wash is twice-distilled through Glenfiddich's copper-pot stills (the distillery employs a craftsman onsite to tend to the stills, which are unique in shape and size) before the heart of the distillate is cut and prepared for maturation.

For this expression, Glenfiddich Malt Master Brian Kinsman traveled to Canada to pick grapes by moonlight at -10˚C. Kinsman met a renowned winemaker in Niagara, where he learned to produce an intensely sweet Icewine.

Upon his return to the Glenfiddich Distillery, the malt master began experimenting with several French oak Icewine casks from the Canadian winery, filling them with different Glenfiddich aged malts for up to six months. Only the rarest whiskies mingled well with the extra Icewine intensity. Winter Storm’s flavor profile is a perfect balance of both headstrong liquids, the heightened candied sweets and oakiness of Glenfiddich complementing by mouth-watering tropical fruit notes and a luscious sweetness from the unique Icewine cask finish.

Blossoming tropical fruit and candied sweets are complemented by wine undertones. The palate is equally inviting with sweet notes of fruit, Turkish delight, and delicious lychee. The sweet fusion of flavors is soon married with a rich drying sensation from the Icewine. The finish is short and crisp.