Learn more
Size750mL Proof92 (46% ABV) *Please note that the ABV of this bottle may vary
The GlenDronach 18-year-old single malt is named after James Allardice. This special founder’s tribute won a Gold Medal at the 2017 World Whiskies Awards. Bottled at 46% ABV. A single malt of exceptional character, it is aged for nearly two decades in the finest Oloroso Sherry casks.
Notify me when this product is back in stock. 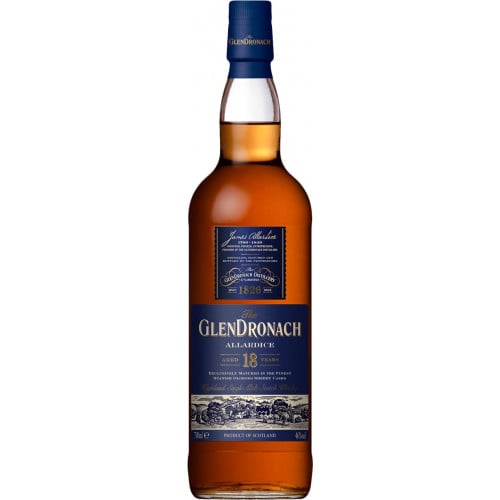 2008 was another period of revamp for the distillery, as they were again sold, in its most recent exchange, to BenRiach. GlenDronach is known for their classic “sherried” Whiskies, meaning the spirit is aged in Oloroso casks. Each single malt is produced using old fashioned handcrafted techniques created through nearly 200 years of tradition. The production process is meticulously monitored from germination to bottling. The distillery has a copper mash tun, 4 stills, two of which are traditional wash backs, and 2 copper pot stills.

This GlenDronach 18-year-old single malt is named after James Allardice. It is a single malt of exceptional character. Aged for nearly two decades in the finest Oloroso Sherry casks, this special founder’s tribute won a Gold Medal at the 2017 World Whiskies Awards. Bottled at 46% ABV.

Pick up a bottle of this iconic Whisky today!

The GlenDronach 18-year-old single malt is named after James Allardice. A single malt of exceptional character, it is aged for nearly two decades in the finest Oloroso Sherry casks. This special founder’s tribute won a Gold Medal at the 2017 World Whiskies Awards. Bottled at 46% ABV.