Size750mL Proof92 (46% ABV)
Auchnagie is a unique and genuine recreation of the single malts crafted by Scotch distilleries over a century ago.
Notify me when this product is back in stock. 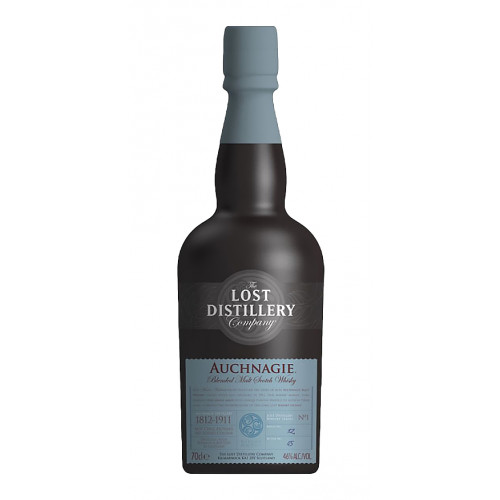 Over the past century, nearly one hundred malt whisky distilleries in Scotland have been permanently closed or destroyed. Most of these distilleries were lost as a result of macroglobal conditions, such as Prohibition, world wars or financial crises. As a result, many of the unique and venerable brands in the Scotch whisky industry were considered permanently lost — until now.

Auchnagie Malt Scotch Whisky is the first release from The Lost Distillery Company. It is a recreation of a single malt whisky produced at the Auchnagie Distillery, which was situated in the village of Tulliemet and operated from 1812 through 1912. The whisky has an aroma of earthy minerals, dried citrus (particularly peaches) and malted grains. The aroma gives way to round notes of creamy vanilla and fruits, which are complemented by undertones of peat, flowers and caramel. The finish is lingering and smooth, with a touch of smoke.

Once the malt whisky used to recreate the Auchnagie single malt has been married together, it is fiinaly prepared for the bottling. "While our ten key components are critical in determining the flavor profile of a whisky we recreate," says Moss, "it's just as important to recognize what wasn't in the whisky. A century ago, there was no such thing as chill filtration or caramel colouring of the final product. That's why we don't do either of these things today."

Aroma of earthy minerals, dried citrus (particularly peaches) and malted grains. Notes of creamy vanilla and fruits on the palate, which are complemented by undertones of peat, flowers and caramel. Finish is lingering and smooth, with a touch of smoke.