Learn more
Size750mL Proof131 (65.5% ABV) *Please note that the ABV of this bottle may vary
Hand-selected by Whisky Maker Gordon Motion, this single malt has spent a dozen years in its first-fill European oak sherry puncheon. The 131-proof expression is balanced and mature with a beautiful depth of flavor. 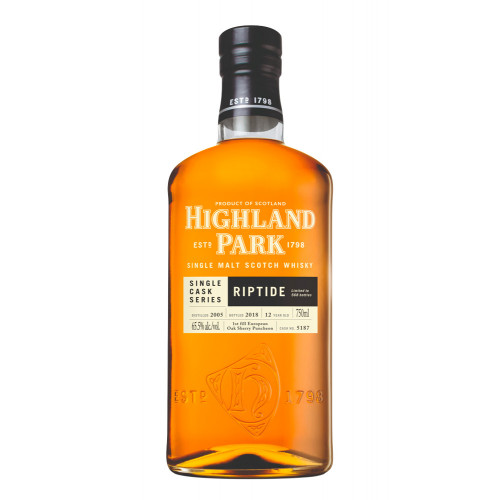 Riptide was released as a part of their Single Cask series. Cask no. 5187 was distilled at Highland Park in 2005, then matured in a first-fill European oak sherry puncheon for more than 12 years, letting Orkey's unique cool Northern climate work its magic. It was hand-selected by Whisky Maker Gordon Motion for its exceptional quality and bottled in 2018 at 131 proof, yielding a total of 568 bottles. It's a balanced and mature single malt with notes of toffee, spice, chocolate, honey, nutmeg, and peat.

Get your bottle of this limited and highly collectible whisky today!

You can expect a malty nose with caramel, vanilla, and peat smoke. On the palate, you'll find caramel, honey, nutmeg, fruit, and smoke notes. The finish is long with lingering smoke.