Size750mL Proof92 (46% ABV)
The exceptional 18 year-old has earned several awards including Gold at the 2018 World Whiskies Awards, and Double Gold at the 2018 San Francisco World Spirits Competition.
Notify me when this product is back in stock. 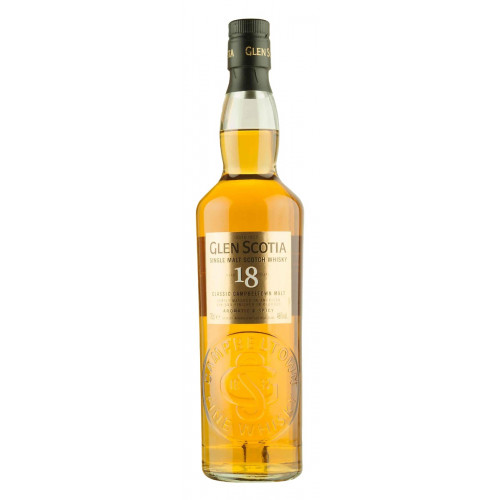 Glen Scotia’s line-up showcases their versatility, as they produced a range of peated and non-peated whiskies, two styles characteristic of Campbelltown. Their malt is sourced from eastern Scotland, and are crafted in open-topped, cast iron mash tuns, and their whiskies are processed with a variation in fermentation time yielding either nuttier, or fruitier malts. Their small-batch distillation process still maintains much of the original equipment designs dating back to the 1830s.

This exceptional single malt whisky was matured from specially selected casks to deliver the true character of a Glen Scotia Malt Whisky. The stunning 18 year-old has earned several awards including Gold at the 2018 World Whiskies Awards, Double Gold at the 2018 San Francisco World Spirits Competition, and Gold Medals at The Spirits Business in 2017 and 2018.

Sweet and smoky on the nose the palate is rich with deep vanilla fruit flavors, apricot, pineapple, and plump sultana. The finish is lingering and dry with a subtle warm spice.