This product is available in: CT, IL, NJ, NY, TX Unfortunately, we can't ship to PO Boxes and APO addresses.

Size750mL Proof86 (43% ABV)
Matured for 15 years in sherry-seasoned American oak and European oak, this expression showcases the skill of The Macallan's wood masters with toffee and subtle spice notes.

This product is available in: CT, IL, NJ, NY, TX Unfortunately, we can't ship to PO Boxes and APO addresses. 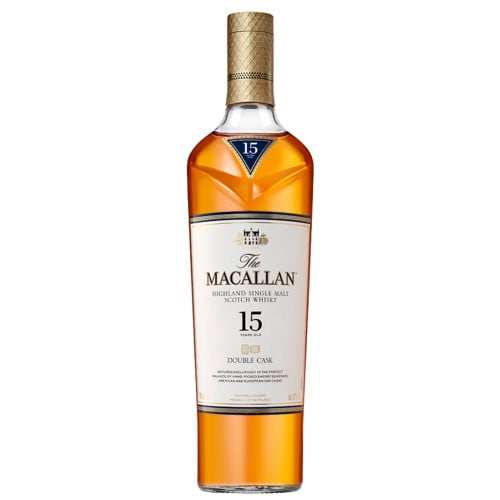 The Double Cask range combines the sweetness of American oak with sherry-seasoned American and European oak casks. These are hand-picked by the wood masters at Macallan. The new American oak is first brought to Spain to be assembled and sherry-seasoned before the barrels travel to Speyside for the maturation. The whiskies are then combined with European oloroso sherry casks. The 15 Year Old Double Cask is an exquisite example of this process with the sherry-seasoned American oak adding toffee to the gentle spice of sherry-seasoned European oak, resulting in an extraordinary fusion of toffee and subtle spice. This sweet and warm-charactered whisky delights with delicate flavors of honey and vanilla, exquisitely balanced with baked apple, sweet raisin, and rich oak spice.

The golden butterscotch colored whisky has dried fruit, toffee, vanilla, oak, and baked apples balanced by honey and spice on the nose. Sultanas and raisins are on the palate with a touch of vanilla, citrus, and wood spice. Finishes warm with caramel, ginger, and citrus notes.