Learn more
Size750mL Proof108.4 (54.2% ABV) *Please note that the ABV of this bottle may vary
Aged for sixteen years in a sherry cask, this whisky was produced at the oldest distillery in Dufftown, Scotland.
Notify me when this product is back in stock. 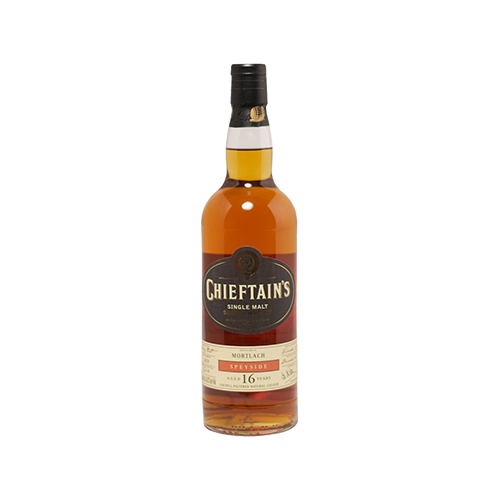 Mortlach Distillery was founded in 1823 by James Findlater, together with his friends Alexander Gordon and James Macintosh. In 1831, however, Findlater sold the distillery to John Robertson for the paltry sum of $270. In 1837, it was sold again to John and James Grant, who dismantled the distilling equipment and shuttered the doors to the distillery. For the next two decades, the building was used first as a brewery, and then (rather curiously) as a church.

In 1851, however, the distillery began producing whisky once more. Even at the time, it was an impressive distillery, according to the Wine & Spirits Trade Record. The distillery had two still-houses — "in one there are three old-fashioned stills . . . in the other there are three larger stills, installed in 1897." The distillery also had "four gigantic malt floors, and the largest mash tun in the district."

In 1964, the distillery was largely rebuilt and today, houses a unique configuration of six stills. The stills — three wash stills and three spirit stills — are each different shapes and sizes (one still is nicknamed "Wee Witchie"because it is shaped like a witch's cap) and aren't paired together. This unusual configuration, together with the partial triple distillation method used at Mortlach Distillery, produces a whisky that is full-bodied and meaty.

Nearly all of Mortlach's whisky production is used for blending and as a result, Mortlach whisky is rarely available as a single malt. Mortlach 16 Year Old Single Malt Scotch Whisky (Chieftain's Bottling) was distilled in November 1995 and was aged for 16 years in Sherry Cask #7282. The cask, which was bottled in December 2011, produced only 614 bottles of Mortlach Whisky.

Mortlach 16 Year Old Single Malt Scotch Whisky (Chieftain's Bottling) has a rich nose, with notes of dried fruits, figs and citrus undertones. On the palate, the citrus notes are balanced with flavors of caramelized apples and brown sugar. Full-bodied, the whisky has a finish of peppercorn and biscotti. Pick up one of these rare treasures today!

Rich nose, with notes of dried fruits, figs and citrus. Initial flavor of citrus and dried fruits, along with caramelized apples, pears, brown sugar and pie crust. Full-bodied and rich, this whisky finishes with a hint of pepper and biscotti.