Learn more
Size750mL Proof92 (46% ABV) *Please note that the ABV of this bottle may vary
Blended from whisky distilled at Ardbeg, Bowmore, Caol Ila and Port Ellen, this Scotch earned a score of 96 points from the Whisky Bible. 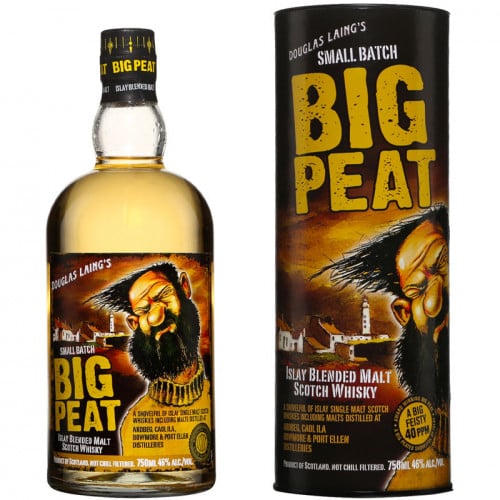 The southernmost of the Inner Hebridean Scottish Isles, the island of Islay (pronounced EYE-lah) is just 240 square miles and home to barely more than 3,400 people. Still, the island is one of just five distilling regions in Scotland whose identity is protected by law.

The Big Peat Small Batch Islay Scotch Whisky is a vatting (or blending) of single malt whiskies that hail exclusively from the island of Islay. Produced by Douglas Laing — one of the most prominent independent bottlers in Scotland — each small-batch of The Big Peat is a blend of whiskies distilled at Ardbeg, Bowmore, Caol Ila and Port Ellen Distilleries (together with a couple of whiskies from other distilleries that remain classified).

Just a few miles west of Ardbeg Distillery, Port Ellen Distillery was founded in 1825 by Alexander Ker Mackay. The distillery is believed to have been the first to incorporate Septimus Fox's spirit safe design into its distillation process, and was one of the first distilleries to trade directly with the United States. Following World War I and the introduction of Prohibition in the United States, however, the distillery was forced to close its doors. In 1966, the distillery was rebuilt and began operating with four new stills heated by a mechanical coal stoker system. In the slump of 1983, the distillery was closed again, and remains closed to this day. The whisky made in the 17 years between its reopening and final closure, however, has acquired a reputation as some of the finest to have been made on Islay at the time.

As a result of the blend of these whiskies, The Big Peat has an array of flavors that are unique to Islay. It has a salty aroma with a touch of smoke, and notes of oily peat on the tongue. The flavors give way to hints of caramel and vanilla, and the finish is smooth, with notes of spices and cinnamon.

Salty aroma with a touch of smoke. Initial notes of oily peat give way to flavors of caramel and vanilla. Finish is smooth and complex, with hints of spices and cinnamon.