Size750mL Proof100 (50% ABV)
Distilled from Scottish barley and matured in used bourbon casks, this whisky is made from casks hand-selected by Bruichladdich's Master Distiller. 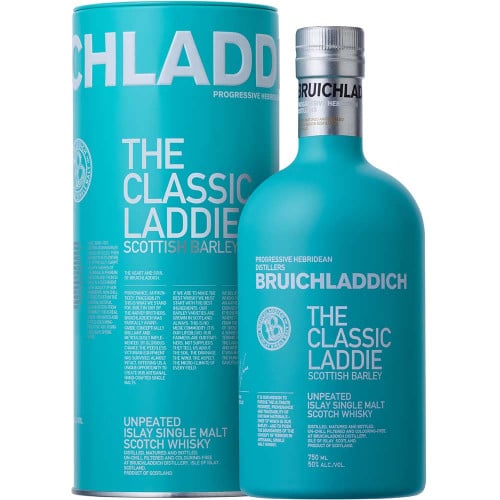 Inspired by an entrepreneurial flair and a youthful enthusiasm, the Harvey brothers began construction of the Bruichladdich (pronounced brook-laddie or broo-lah-dee) Distillery in 1881. For five decades, the brothers — descendants of a dynastic whisky family — owned and operated the distillery. Following the death of William Harvey in 1936, however, the distillery changed hands a number of times and was shut down in 1994, seemingly forever. In 2000, the distillery was purchased by a group of investors led by Mark Reynier and Murray McDavid. Together, the pair convinced Jim McEwan, who had been working at Bowmore Distillery since the age of 15, to join Bruichladdich as master distiller.

Today, McEwan's incredible work ethic and creative vision have made Bruichladdich Distillery one of the most exciting and innovative distilleries in Scotland.

Bruichladdich Single Malt Whisky is made exclusively from unpeated barley grown on 23 different farms in Scotland. After the grains are milled and mashed, they are fermented in the distillery's original washbacks, which are made of Douglas Fir. The wood from the washbacks absorbs heat generated during fermentation, and allows for a longer, slower fermentation process as compared to steel, resulting in a more flavorful and rich whisky.

The Classic Laddie is "our signature bottling and the definitive Bruichladdich," says McEwan. Trickle distilled and matured for its entire life in American oak casks that were previously used to mature bourbon, the whisky has an aroma of green apples, stewed berries and biscuits. The aroma gives way to notes of citrus, melon, vanilla and salted caramel on the palate, and finishes with a touch chocolate, honey and earl gray tea.

This whisky "is a testament to the quality of our ingredients," says McEwan.

Pick up a bottle of fine whisky today!

Aroma of green apples, stewed berries and biscuits. Notes of citrus, melon, vanilla and salted caramel on the palate. Finishes with a touch chocolate, honey and earl gray tea.

4.9 out of 5
(6 reviews)
Write a review
Real email address is required to social networks
Sign in
Login with Google
Login with Facebook
Or
We also recommend