Size750mL Proof92 (46% ABV)
Lagavulin is one of the most legendary single malt brands and has been crafted on the shores of Islay for more than 200 years – mirroring the meticulous calculation and tenacity employed by the Lannister’s in their rise to conquer the Iron Throne.
Notify me when this product is back in stock. 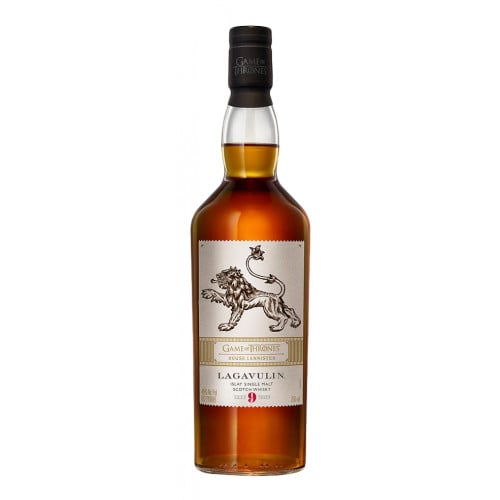 Lagavulin Single Malt Scotch Whisky is known as one of the most intense, smoky single malt whiskys ever made — the peated barley used to create Lagavulin Single Malt has up to twenty times as much exposure to peat smoke as compared to typical Scotches. Once the grains used to craft Lagavulin Whisky have been harvested and malted, they are dried over a peat and gas fire calibrated specifically to produce Lagavulin's signature, bold flavor profile.


The smash-hit series Game of Thrones has teamed up with spirits giant Diageo, to create eight rare Scotches inspired by the royal Houses of Westeros. In honor, if the eight and final season of the Emmy-winning show each bottle tells the tale of each of the Seven Kingdoms. These iconic whiskeys serve as must-have collectibles for Game of Thrones and whiskey adorers.

Lagavulin is one of the most legendary single malt brands and has been crafted on the shores of Islay for more than 200 years – mirroring the meticulous calculation and tenacity employed by the Lannister’s in their rise to conquer the Iron Throne.

This single malt whiskey is a roaring single malt that recalls the Lannisters' riches and is best served neat or with a single drop of water. Characteristic Lagavulin sweet smoke explodes on the nose with a little more brine than the other expressions. The palate opens with smoked caramelized banana and heavy vanilla and burnt marshmallow which subside into a light dry, slightly salted caramel.

Sweet smoke on the nose with a whiff of sea breeze. The palate is smoky with notes of caramelized banana, smooth vanilla and charred marshmallow. The finish is dry and light with subtle salted caramel.