Be the first to review this product
This expression is inspired by Jon Glaser’s chance encounter with a man in the South of Spain, where he was introduced to Sherry for the first time.
$70.99
Add to Wish List

Compass Box pushes the boundaries of innovation to new levels with their art of “whisky-making.” Seemingly uninhibited by the norms of the formidable Scottish whisky industry, Glaser has proven himself a true alchemist. In 2005, his aptitude for winemaking prompted a disruptive experimental sensation; The Spice Tree release, a blended whisky made using inner staves, or wooden slats inserted into casks to enhance flavor. Wine-makers use this technique as a more economical way to add oak flavor wine.

Inspired by an eponymously named bespoke whisky they recently created for a bar in New York City called The Spaniard, Compass Box decided to explore the sherried style further to create a new whisky for the Compass Box permanent range. The name is a nod to Glaser’s chance encounter with a man in the South of Spain, where he was introduced to Sherry for the first time. For this expression, 48% of the whiskies have been aged in ex-Sherry casks and 25% in ex-Spanish red wine casks.

Full, soft and sumptuous on the palate with notes of citrus peel, red wine and spices. The finish is long, with hints of rich vanilla pannacotta, ripe berries and cherries. 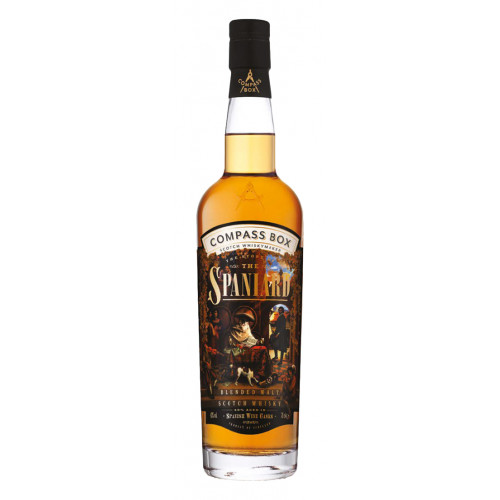