Size750mL Proof80 (40% ABV)
This is a vibrant and intense Jura single malt, boasting flavors of sweet honey, warm spice, banana, and chocolate. Aged for 12 years in ex-bourbon and finished in Oloroso Sherry casks, it's bottled at 80 proof.
Notify me when this product is back in stock. 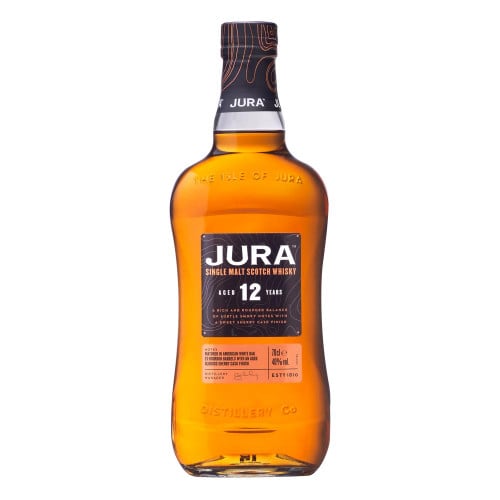 Standing just sixty miles off the western coast of the Scottish mainland, the Isle of Jura is one of the most sparsely populated islands in Scotland — it boasts 5,000 red deer, 212 human beings, one road, two churches and just one distillery.

The first licensed distillery on Jura, The Jura Distillery was founded in 1810 by Laird Archibald Campbell, and sits alongside the Corryvreckan Whirlpool, the world's third largest whirlpool. The distillery sources its water from Loch a’Bhaile-Mhargaidh and is owned by independent bottlers Whyte & Mackay. Nearly a century after it was opened, the distillery was dismantled due to a land dispute, and remained closed until 1963. Today, the Jura Distillery represents a fusion of modern distillation techniques with traditional craftsmanship and remains one of the most remote and isolated distilleries on the planet.

Released in 2021, Jura 12 Year Old Single Malt Scotch Whisky is made from Scottish barley, which is milled at the distillery and mashed with hot water in order to release its natural sugars. Once the barley has been mashed, it is fermented and then distilled through Jura's 28-foot tall copper-pot stills. Aged in American white oak ex-bourbon barrels for 12 years and finished in Oloroso Sherry casks from Jerez, Spain, this is an intense and vibrant single malt with sweet honey flavors mingling with warm spice, banana, soft citrus, and just a touch of fresh coffee and chocolate.

Get your Jura 12 Year Old today!