Size750mL Proof92 (46% ABV)
A blend of mostly Islay single malts, this whisky earned the title of "Scotch Whisky Blend of the Year" from Whisky Advocate. The gift box contains a full-sized bottle and 2 laser-etched rocks glasses. 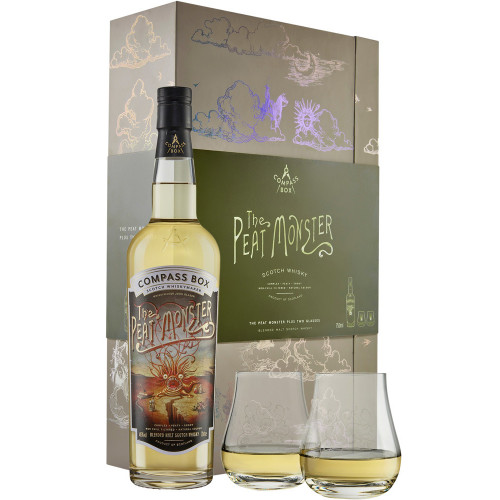 The Peat Monster is made from a blend, or vatting, of mostly Islay single malt whiskies from Islay that come from Caol Ila, Laphroaig, and other distilleries. After sourcing each of the single malts, Compass Box Whisky Co. marries the whiskies together for a few months in refill American oak casks before bottling each batch. The 92-proof spirit is perfect for any lover of big & rich smoky whiskies. The gift box contains a full-sized bottle of The Peat Monster and two rocks glasses, laser-etched with the Peat Monster.

Gift it to a loved one or yourself today!

The nose is intensely peaty with hints of brine, reminiscent of beach bonfires. Notes of smoke are balanced by a hint of fruitiness, honey, and citrus, leading to a subtle yet lingering finish.