Size750mL Proof86 (43% ABV)
Matured in three types of casks, this whisky earned the Double Gold Medal at the San Francisco World Spirits Competition in 2012 and 2013.
Notify me when this product is back in stock. 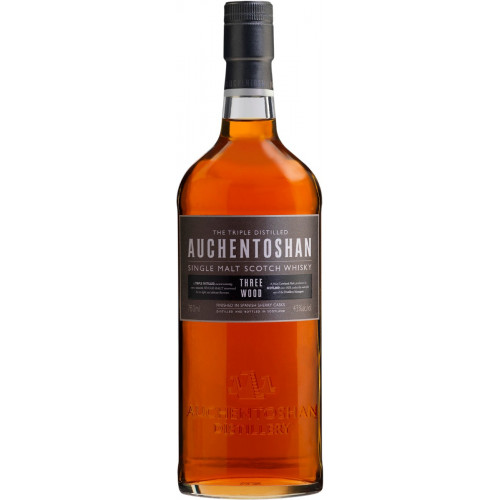 Situated at the foot of the Kilpatrick Hills in Western Scotland, Auchentoshan (pronounced Aw-khen-tosh-an) Distillery was founded in 1800 and is one of the last remaining Lowland Single Malt Whisky distilleries. The distillery is nicknamed "Glasgow's Distillery" due to its proximity to the eponymous city, and its whisky is nicknamed "breakfast whisky" due to its sweet flavor and elegant texture. During World War II, the distillery was bombed relentlessly by Germany, and much of the whisky that was being matured in its rickhouses was lost to fire or spilled into the Clyde River, which is situated adjacent to the distillery. Following the end of the war, the distillery was rebuilt and today, it remains a testament to Scottish perseverance and innovation.

The whisky earned the Double Gold Medal at the San Francisco World Spirits Competition in 2012 and 2013, and earned a score of 92 points from Wine Enthusiast.

Aroma of oak and spices is balanced by touches of brown sugar, oranges plums and raisins. Notes of hazelnut and cinnamon are accented by touches of maple syrup, caramel and butterscotch on the palate. Slightly sweet, fruity finish.