Size750mL Proof112.4 (56.2% ABV)
Arran’s Quarter Cask expression or The Bothy is a complex, rich and intensely fruity single malt, bottled at cask strength. The Arran Single Malt for this expression was initially matured in first-fill ex-bourbon barrels for 7 years, and then for additional 2 years in smaller Quarter casks.
Notify me when this product is back in stock. 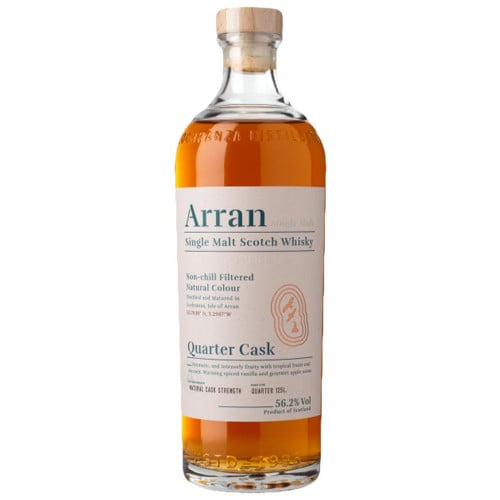 Arran’s Quarter Cask expression or The Bothy is a complex, rich and intensely fruity single malt, bottled at cask strength. The Arran Single Malt selected for this expression was initially matured in first-fill ex-bourbon barrels for 7 years, and then transferred for secondary, 2-year maturation into smaller Quarter casks made of the finest American oak, which produces far greater contact between the whisky and oak, resulting in a faster, more intense maturation.

Apple tart and pineapple brioche on the nose lead to Arran’s hallmark citrus notes on the palate, which are accompanied by the sweet spice of cinnamon and vanilla. The finish is sweet, with pineapple, honey, vanilla and coconut.