Learn more
Size750mL Proof86 (43% ABV) *Please note that the ABV of this bottle may vary
Aged for over 10 years, this whisky was named Blended Whisky of the Year in 2012 by Whisky Advocate. 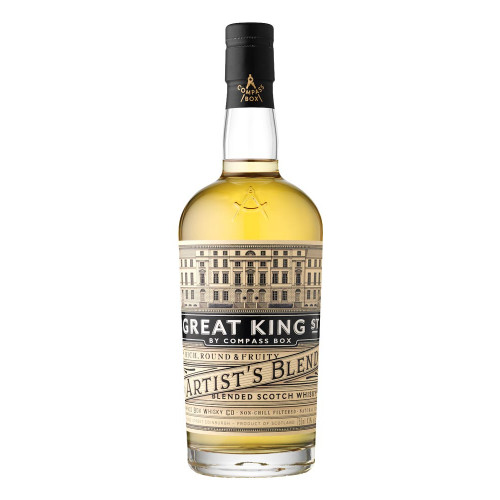 Since its inception in 2000, Compass Box Whisky Company has been situated along Great King Street in the heart of Edinburgh, Scotland. The long, windy street was constructed in 1823 and is celebrated for the Georgian neo-classical architecture that surrounds it. Great King Street "represents the Enlightenment thinking of its day," says John Glaser, the founder of Compass Box Whisky Company, "which we feel is an appropriate connection to the sort of thinking we apply to whisky."

Compass Box Great King Street Artist's Blend Blended Scotch Whisky is a marriage of single malt Scotch whiskies from the Highlands and Speyside regions of Scotland, together with a single grain whisky from the Lowlands region of Scotland. "We believe it is time for the world to reconsider the joys of well-made blended Scotch whisky," says Glaser, who has earned Whisky Magazine's Innovator of the Year Award four times. "That is why we have created Great King Street."

In comparison to other blended whiskies, Great King Street is crafted using more malt whisky (over 50%) than grain whisky. "This provides more character and complexity"to the blend, says Glaser. In addition, the grain whisky used in the blend is the highest quality single grain whisky available and, having been matured for over 10 years, contributes much sweeter and richer flavors than traditional grain whiskies. Great King Street Scotch Whisky is also influenced by the three different types of casks in which the whisky matures: used, American oak barrels contribute notes of vanilla, cinnamon and woody spice to the whisky, while new, French oak barrels lend notes of marshmallow, roasted coffee and toasted biscuits and used sherry casks add touches of dried fruits and cherries. Once the whisky has been blended and matured together, each batch is bottled naturally without the use of any additives, coloring or chill filtration.

Compass Box Great King Street Artist's Blend Blended Scotch Whisky has an aroma of cinnamon, oak and dates, which open up to notes of creamy vanilla ice cream, poached pears and peaches on the palate. The sweet flavor of dried fruits is complemented by waves of cinnamon, woody spice and white pepper, and leads to a smooth, soft finish. "By applying the same skill, techniques and philosophy that we use for the Compass Box signature range of whiskies, Great King Street offers a style and approach to Blended Scotch that has not existed before," says Glaser. Great King Street earned a score of 91 points from Whisky Advocate, which named it the Blended Whisky of the Year in 2012.

"Great King Street is a new and compelling alternative for both whisky enthusiasts who ordinarily drink only malt whiskies, and for whisky novices. We call it a "˜craft blend'."

Aroma of cinnamon, oak and dates, which open up to notes of creamy vanilla ice cream, poached pears and peaches on the palate. Sweet flavor of dried fruits is complemented by waves of cinnamon, woody spice and white pepper, and leads to a smooth, soft finish.