Size750mL Proof86 (43% ABV)
Carin Luna-Ostaseski envisioned a modern blended Scotch that would be ultra-premium yet accessible. After a successful Kickstarter campaign, the whisky was released in 2013. The 96 Points award-winning expression is distilled, blended, matured and bottled in Scotland.
Notify me when this product is back in stock. 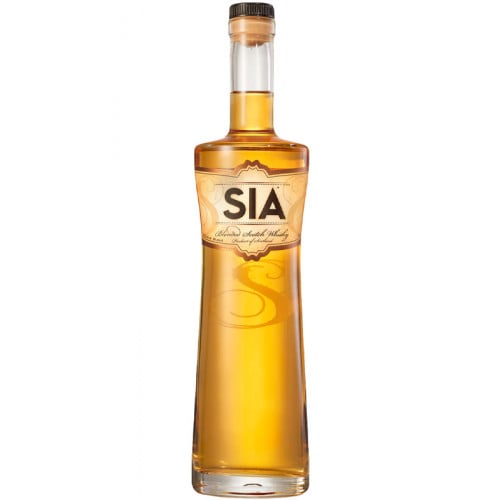 The story of SIA Scotch Whisky is wildly different than your standard founder-had-a-vision-while-sipping-on-something fare. For starters, Carin Luna-Ostaseski is a first-generation Cuban American who didn't care much for Scotch in her mid 20s, when a friend organized a tasting. The event set her on a path of discovery that would have her sample hundreds of whiskies, studying the soul of the spirit.

As she started sharing her passion with friends, her love for Scotch grew. In 2012, she raised nearly $50,000 on the crowdfunding site Kickstarter.com. She partnered with a Scottish blender and released SIA in 2013. a blend of Speyside, Highlands Lowlands and Islay malt and grain whiskies that's bottled at 86 proof, the main malt coming from Teaninich. Aged in a combination of refill and first-fill American oak ex-bourbon casks, it's a modern take on the spirit. SIA was designed to be "accessible, inviting, smooth and easy to drink."

SIA Blended Scotch Whisky soon started racking up awards that include a Double Gold Medal at the San Francisco World Spirits Competition in 2014. In 2016, the expression was awarded 96 points at the Ultimate Spirits Challenge. Smooth, balanced, and complex, it's a modern ultra-premium whisky that manages to be approachable and affordable.

Get your bottle of this modern whisky today!

The nose is inviting with vanilla, caramel, citrus, and spice aromas. On the palate, you'll find lemon and mandarin orange zest, honey, and a touch of smoke that lingers through the smooth finish.