Size750mL Proof92.6 (46.3% ABV)
This young and incredibly smooth Deanston Single Malt Virgin Oak release won Silver Medals at the International Spirits Competition, and the IWSC, and a Gold at the Spirits Business awards.
Notify me when this product is back in stock. 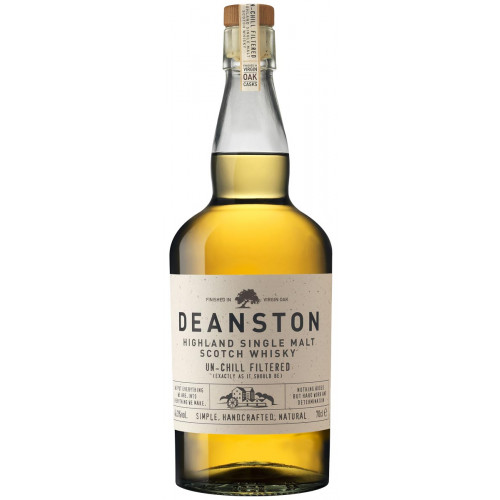 In 1785, Sir Richard Arkwright designed and helped construct a cotton mill on the banks of the River Teith. The mill, which was situated just outside Edinburgh, operated for nearly two centuries and employed as many as 1,500 works in the 19th century. In 1965, however, as demand for Scottish cotton fell, the mill was forced to close its doors.

The same year, James Finlay, Brodie Hepburn and A.B. Grant (collectively known as the Deanston Distillers) purchased the Deanston Mill and began converting it into a distillery. The mill was ideally suited to produce and age whisky — it was already situated along one of the purest water sources in all of Scotland and the mill's storage cellars, originally designed to store cotton, were perfect for housing maturing casks of whisky. The refurbishment took nearly a year and cost over £300,000, but on October 17, 1966, the Deanston Distillers opened the doors to Deanston Distillery for the first time.

This single malt is young whisky, matured for a first round in ex-bourbon casks from a family owned and operated cooperage in Kentucky. This whisky is then finished in new oak barrels, imparting incredibly subtle spiced aromas to the spirit. This Deanston Single Malt Virgin Oak release won Silver Medals at the International Spirits Competition, and the IWSC, and a Gold at the Spirits Business awards.

Pick up a bottle of this single malt today!

On the nose are notes of heady virgin oak, bursting with lemon zest and sweet barley sugar with delicious notes of apple and nutmeg. On the palate is delightful sweetness evoking memories of candied fruits and vanilla toffee balanced with heather honey. The finish is a satisfying light spice with a rewarding burst of honeyed malt and sweet oakiness.