Size750mL Proof86 (43% ABV)
This full-bodied, flavor-packed whisky is a blend of whiskies distilled in the Highlands, Speyside, Lowland and Islay regions of Scotland. 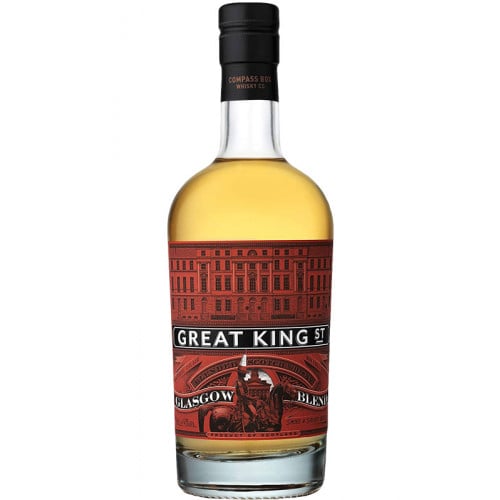 Since its inception in 2000, Compass Box Whisky Company has been situated along Great King Street in the heart of Edinburgh, Scotland. The long, windy street was constructed in 1823 and is celebrated for the Georgian neo-classical architecture that surrounds it. Great King Street “represents the Enlightenment thinking of its day,” says John Glaser, the founder of Compass Box Whisky Company, “which we feel is an appropriate connection to the sort of thinking we apply to whisky.”

The whisky is composed of a blend of 67% malt whisky from Islay, Speyside and Highlands regions of Scotland, together with 33% grain whisky from a Lowland distillery in Fife. The Islay malt (approximately 20% of the blend) comes from a distillery on the south shore of the island, and is vatted with a fruity malt from the village of Brora and a rich, sherried Speyside malt from the Aberlour region (approximately 33% of the blend). The whiskies have matured in a combination of first-fill sherry casks, first-fill and refill ex-bourbon barrels and new French oak casks. As a result of this unique blend, Compass Box Great King Street Glasgow Blend Blended Scotch Whisky has an aroma of peaty smokiness that is underpinned with touches of pomegranate juice, citrus and plums. Notes of sherry, berries and citrus dominate the palate, and lead to a full, round finish with a touch of sweetness.

“Great King Street is a new and compelling alternative for both whisky enthusiasts who ordinarily drink only malt whiskies, and for whisky novices,” says Glaser. “We call it a ‘craft blend’.”

Aroma of peaty smokiness that is underpinned with touches of pomegranate juice, citrus and plums. Notes of sherry, berries and citrus dominate the palate. Full, round finish with a touch of sweetness.