Size750mL Proof80 (40% ABV)
This whiskey, which was awarded 91 points at the Ultimate Beverage Challenge, is made using a 180-year-old pot still at the oldest distillery in Ireland. 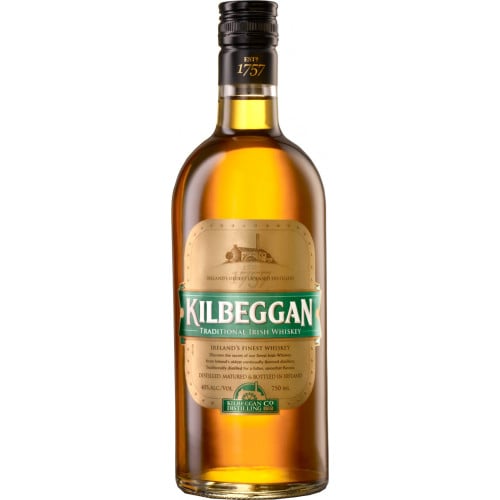 Kilbeggan Distillery, Ireland's oldest operating distillery, was founded by Matthias McManus in 1757 on the banks of the river Brosna, where there is an abundance of the three essential ingredients for making whiskey — water, grains and turf. McManus passed the distillery down to his son, John, who managed the distillery until the turn of the century, when John was executed for his part in a local uprising against English rule.

Kilbeggan Irish Whiskey is produced in traditional Irish fashion — once the mash is made from cereals of grain and barley, along with pure Irish spring water, the resulting wort is transferred to wooden washbacks to ferment. The fermented liquid is then double-distilled in copper pot stills, which allows the whiskey to retain many of the raw flavors of its ingredients. Incredibly, the second distillation is done through the oldest working pot still in Ireland, which is over 180 years old.

After distillation, Kilbeggan Irish Whiskey is placed in ex-bourbon casks and left to age for three years inside Kilbeggan Distillery's 200-year-old granite warehouses. This aging gives the whiskey a clean nose, with aromas of breakfast cereal and green apple. The palate is lush, with a pronounced malt and honey character, and leads to a long, delicate finish with spices, grape notes and oak all coming together.

Pick up a whiskey from Ireland's oldest distillery today!

Aromas of breakfast cereal and green apple. Palate is lush, with a pronounced malt and honey character, and leads to a long, delicate finish with spices, grape notes and oak all coming together.