Size750mL Proof119.2 (59.6% ABV)
Made from unpeated barley, this single malt pays homage to Caol Ila's Distillery Manager.
Notify me when this product is back in stock. 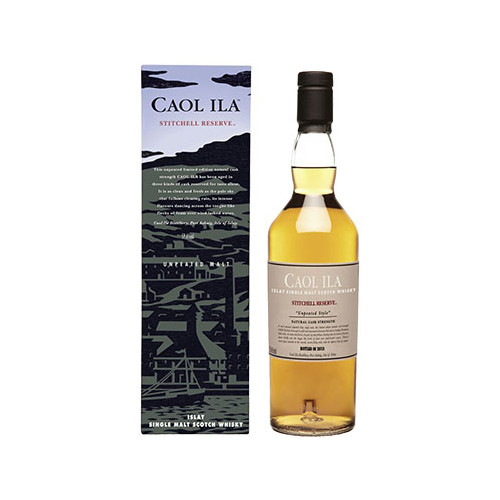 The southernmost of the Inner Hebridean Scottish Isles, the island of Islay (pronounced EYE-lah) is just 240 square miles and home to only 3,457 people. Still, the island is one of just five distilling regions in Scotland whose identity is protected by law. Islay's unique climate and geography impart signature characteristics to Scotch distilled and matured on the island. Despite its small size, the island boasts 130 miles of coastline, and the warm Gulf Stream from the Atlantic Ocean provides for cool winters and mild summers. Together, the salty winds and peat bogs of Islay result in Scotch whisky that has a signature salinity and is balanced by a touch of smoke.

Nestled in a hidden cove near Port Askaig, Caol Ila Distillery (pronounced "Cull Eela,") was founded in 1846 by Hector Henderson. It borrows its name (which means "The Sound of Islay"in ancient Gaelic) from the sea sweeping past its dramatic and almost hidden location — it is situated between a steep cliff and the eastern shores of the Sound of Islay. For over a century, small coal-fired boats known as puffers navigated the Sound and brought barley, coal and casks to the distillery. Although the puffers no longer exist, Caol Ila continues to use locally malted barley and pure spring water sourced from Loch Nam Ban (the water travels through limestone and peat before reaching the distillery).

Caol Ila Stitchell Reserve Single Malt Scotch Whisky was crafted in homage to Billy Stitchell, Caol Ila's Distillery Manager. Stitchell is the fourth generation of his family to work at Caol Ila, and has been working at the distillery for nearly four decades. "We really felt, and by coincidence, not design, it was simply a great opportunity to acknowledge the fact that Billy has been at Caol Ila for almost 40 years," says Dr. Nick Morgan of Diageo.

Caol Ila Stitchell Reserve Single Malt Scotch Whisky is crafted exclusively from unpeated barley, which is milled and mashed before being fermented in Caol Ila's wooden washbacks and then distilled through its copper-pot stills. Unlike other distilleries on Islay (particularly Lagavulin), Caol Ila distills the whisky in copper-pot stills that are less full in order to maximize copper contact. Following distillation, the whisky is matured in three different types of casks: refill American oak casks, rejuvenated American oak casks and ex-bodega European oak casks.

As a result, it has an olive golden color, along with an aroma of fresh herbs, lemon zest and papaya. The aroma gives way to a medium-bodied, oily whisky, with notes of sweet spiciness, citrus, honeyed oak and roasted nuts. The finish is aromatic and spicy, with touches of cloves, peat, salty tang and cinnamon.

Only a limited number of bottles of this single malt whisky whisky will ever be released. Pick up a bottle today!